One more to go

There are no revenue records for a wetland in Srinagar. Is that why it is being encroached and constructed upon by the government? 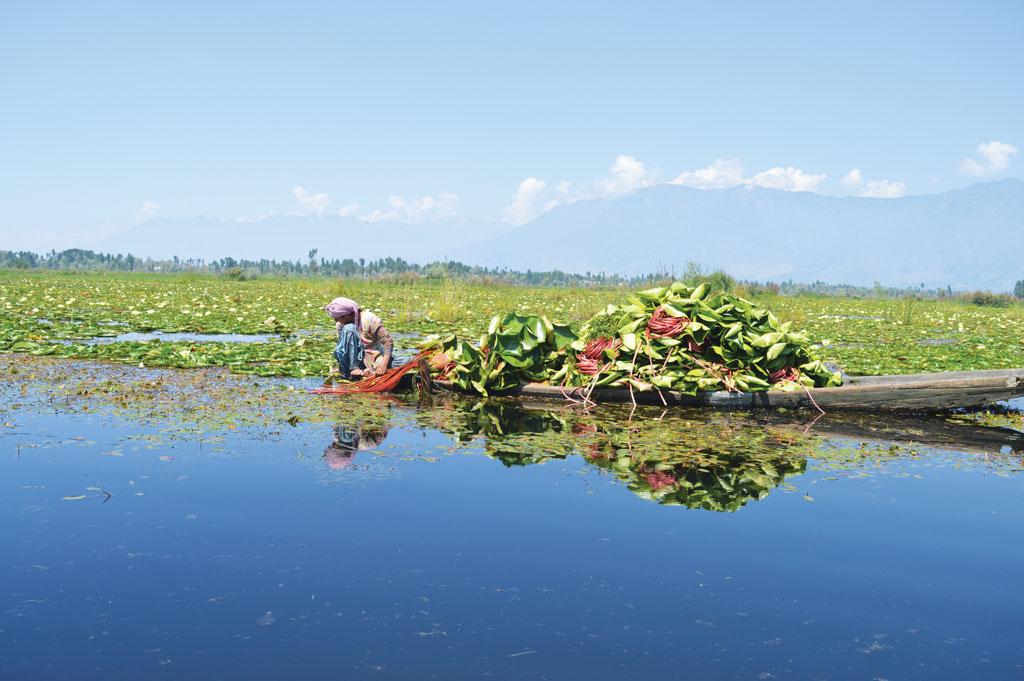 The Narkara wetland, 12 kilometres south of Srinagar, is a major bird habitat and flood absorption basin for the city (Photo: Athar Parvaiz)

SRINAGAR HAS been losing its wetlands over the years. In a series of environmentally destructive projects implemented by the state government, offices, hospitals and residences have been built over wetlands in areas like Bemina, Barzulla, Hyderpora, Sanat Nagar, Rawalpora and Natipora. According to a study by the Jammu and Kashmir government’s Department of Environment, Ecology and Remote Sensing, wetlands in Srinagar reduced from 13,426 hectares (ha) in 1911 to 6,407 ha in 2004. And now, the Department of Rakhs and Farms (DRF)is fighting a strange battle to ªsaveº the sprawling Narkara wetland, of which it doesn’t even have ownership papers.

Wetlands in the state are under the jurisdiction of the Department of Wildlife Protection. However, the DRF claims Narkara as its own by virtue of its foundational mandate of 1955, under which it was given jurisdiction over certain lands in Srinagar and other parts of Kashmir, like Rakh-i-Arat in Budgam and wetlands near Bandipora’s Wular lake. Since the department has no revenue records of Narkara, the wetland, located 12 km south of central Srinagar, is being encroached slowly, with many portions on the edges being grabbed by land mafia. According to a study titled Urban Sprawl of Srinagar City and its Impact on Wetlands, published in May 2014 in the International Journal of Environment and Bioenergy, Narkara’s area was 342 ha in 1971, which shrank to 261 ha in 2010.

“When we try to stop encroachers, they say how can you stop us when you don’t have ownership documents?” Abdul Rahim Samoon, Director, DRF toldDown To Earth (DTE). “Recently, three of our staff received severe injuries in an assault by land-grabbers. We have lodged an FIR and have written to the Budgam police as Narkara falls within its jurisdiction,” he adds.

A letter (dated June 16, 2017) written to the Superintendent of Police (SP), Budgam, by Samoon following the assault on his employees, reads: “Such heinous activities are totally unacceptable and warrant immediate action to safeguard government property and lives of officers. It is requested that you take serious action against the criminals and help us safeguard the land.”

However, when DTE contacted Budgam SP, Tejinder Singh, he said that he had not seen the letter yet. “I will see this letter and decide about the action only after reading it.”

Budgam’s Deputy Commissioner, Mohammad Harun Malik, says that government has identified 80 ha of Narkara for a regional branch of the Indian Institute of Management, 18 ha for Krishi Vigyan Kendra and some land for other small projects. “After these projects are in place, no one can encroach there,” Malik says, smugly.

What the Department of Higher Education forgets is that Narkara is an important flood absorption basin and the government’s plan to develop it could spell disaster for almost half of Srinagar. Imtiyaz Ahmad Lone, Wildlife Warden for Central Kashmir, told DTE that wildlife officials have often taken up the issue of Narkara’s encroachment several times. “Once Narkara is gone, urban sprawls of Srinagar such as Hyderpora, Sanat Nagar, Barzulla and Bemina will be vulnerable to floods even after a brief spell of rain,” an engineer from the Department of Irrigation and Flood Control (IFC), told DTE.

In a letter (dated July 27, 2017) written to the Chief Town Planner, the IFC department has argued that the 100m buffer for an important wetland, Narkara, in southern Srinagar has been shown “deep inside the wetland” and “deep inside the actual edge of the wetland” which is demarcated with “well-established bunds”.

The destruction during the 2014 floods was widely attributed to housing being raised on flood basins across Kashmir’s urban areas (see ‘In a tragic state’, Down To Earth, 1-15 October 2014).

Despite the 2014 tragedy, authorities do not seem to have learnt their lesson and wetlands continue to be destroyed. The latest is Rakh-i-Gund Akshah, a wetland 7 km south-west of city centre Lal Chowk. On its website, the Srinagar Development Authority terms its upcoming 304 ha housing project on Rakh-e-Gund, a “dream project”.

The site had absorbed excess waters for three days in September 2014 before the flood. Most of it has been rented out by the DRF to farmers for growing paddy and other agricultural activities.

Interestingly, the first Master Plan for Srinagar (1971-91), which is regarded by experts as the first comprehensive planning effort of the state government, had acknowledged the existence of flood basins on Srinagar’s east, west and south.

Civil society has taken up the cudgels for Narkara. Faiz Bakshi, Convenor of Srinagar-based non-profit Environmental Policy Group, says that his group has filed a petition in the Jammu and Kashmir High Court where it has challenged the government’s decision of developing infrastructure in Narkara. “We have argued that the government is hell-bent on destroying the local ecology despite knowing that the September 2014 flood caused more damage because we destroyed our flood basins,” Bakhshi says and adds that the court has directed the government to explain its position. Syed Ali Safvi, chairperson of non-profit Bemina Development and Welfare Forum agrees. “If Narkara is destroyed, it will put our lives in danger as it absorbs rain and flood waters.”

Shahid Ahmad Wani, who heads the environmental science department in Srinagar’s Sri Pratap College, says the city’s hunger for land doesn’t mean that the government should start encroaching on wetlands. “This is dangerous because wetlands are considered the earth’s kidneys and also act as flood absorption basins,” he says, adding that the government should not only abandon its plan to destroy Narkara, but should also notify it as a wetland so that it can be conserved properly.