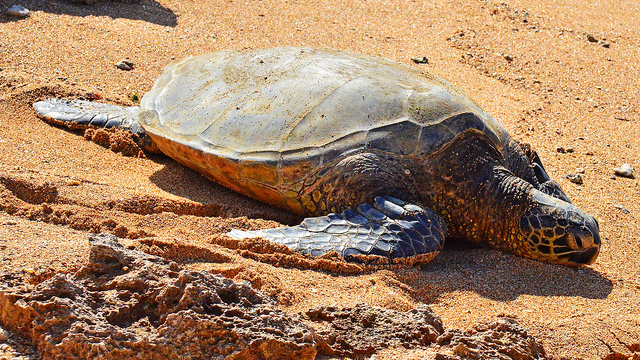 Around one hundred and fifty Oliver Ridley turtles and a bottlenose dolphin were found dead in Odhisha’s Puri on January 20.

“The turtles come for annual nesting to Gahirmatha (at the mouth of the rivers Devi and Rushikulya). They were probably hit by trawlers in sea,” said Divisional Forest Officer, Chittaranjan Mishra. The turtles have been sent for post mortem autopsies and further investigations are on, he added.

There is a prohibition on fishing within twenty kilometres from the beach but fishermen continue the practice, illegally.

Sand artist Sudarshan Patnaik made sand sculptures of the turtles, along with a message reading ‘Give us Space to Live’ after he saw the carcasses lying on the beach.

Oliver Ridley sea turtles are found in the Indian and Pacific oceans and are known for their peculiar nesting habits. The females of the species come in large numbers to lay eggs at the same beaches from which they first hatched.

The coast of Odisha is the largest nesting site for Oliver Ridley turtles in the world.