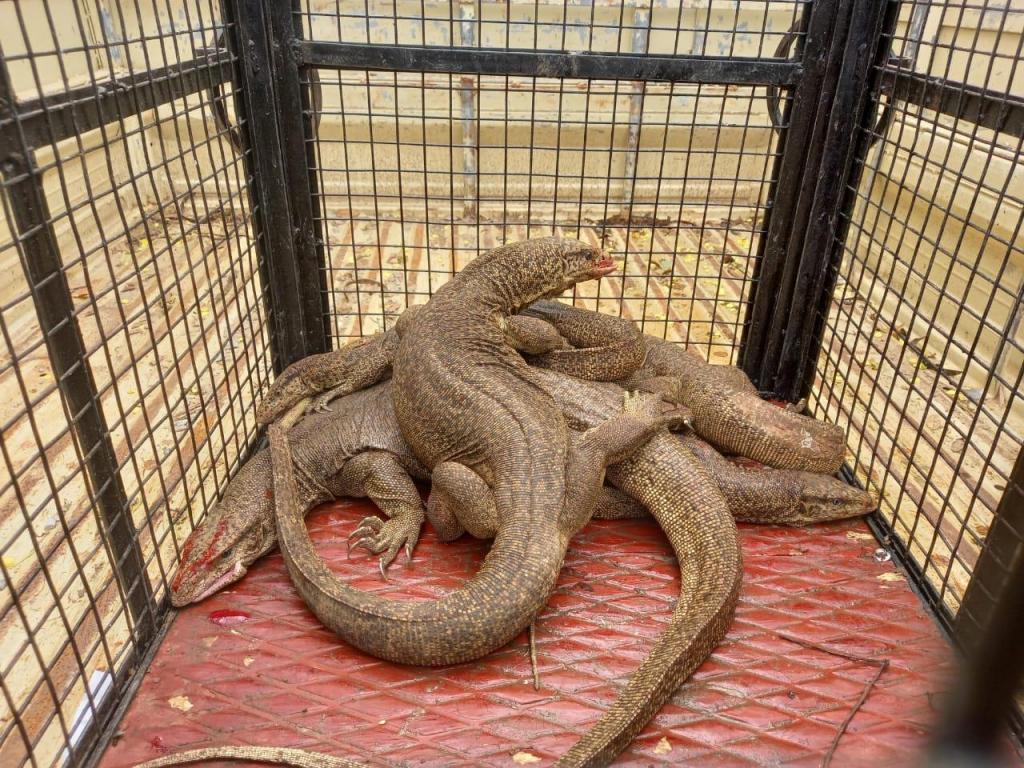 The forest department and the police raided the house of a man in Tarini slum in Bhubaneswar June 14, 2021 acting on a tip-off and seized the reptiles. They found that the lizards were packed in a small cage, according to Prasant Kumar Panda, assistant conservator of forest, Bhubaneswar.

The traffickers could not produce any document to establish the reptiles were lawfully kept. The team seized all the Bengal monitors from them and arrested two persons under the provisions of the Wildlife Protection Act, 1972 (WPA).

Further investigation is in progress to find the origin of the lizards and potential buyers. Forest and police officials have launched a drive to bust an international syndicate that peddles the lizard species, one of the world's most illegally traded reptiles, said Panda.

The Bengal monitor or common Indian monitor (Varanus bengalensis) is a large lizard that is mainly terrestrial. It is 61-175 cm long. The monitors are carnivorous and non-poisonous.

The monitor lizard is protected under Schedule I of WPA but is regularly killed for its meat, blood and oil. Its genitals are sold as a charm or an aphrodisiac as well as cure for several ailments, said Suvendu Mallick, a herpetologist and general secretary of Odisha Snake Helpline. Medical professionals, however, have dismissed the medicinal properties of the lizard’s genitals.

The species is listed under the ‘Least Concern’ category on the International Union for Conservation of Nature Red List but its population is dwindling due to rampant poaching, said Mallick.

Trafficking and poaching of Bengal monitors is rampant in districts like Puri, Cuttack, Kendrapara, Jagatsinghpur, Kandhamal, Nayagarh, Ganjam, Kalahandi, Boudh, Mayurbhanj and Rayagada. The animal’s hide and other body parts are usually smuggled by to other states by road and rail.

The forest department is yet to chalk out any concrete plan for conserving this reptile, Mallick added. “Bengal monitor is a lesser-known species and does not enjoy the same status as crocodiles and other reptiles.”

There is no population record for the species at the state or government levels either, he said.

It plays an important role in maintaining the balance and health of the forest ecosystem, for which its survival is important, said Jayakrushna Panigrahi, secretary of Odisha Environmental Society.