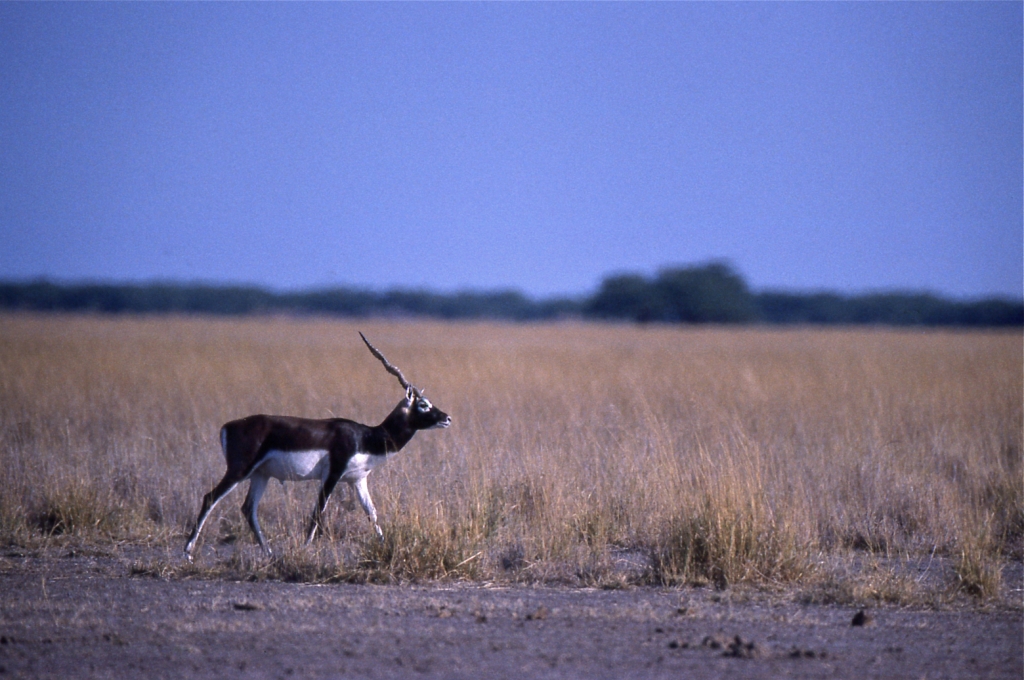 A blackbuck in Velavadar National Park in Gujarat Credit: Flickr

Refuge pockets are critical for persistence and survival of Blackbuck in human-dominated landscapes, according to a recent study by a team of scientists from WCS, Centre for Wildlife Studies, Centre for Ecological Sciences at the Indian Institute of Science and Manipal University. The study examines how Blackbuck navigate through habitats in the face of threats by predators and anthropological pressures.

The study examines how blackbuck use habitats characterised by seasonally changing resources, threats of predators, intensive human pressures, more so, conversion of habitat by humans in Maharashtra’s Great Indian Bustard Sanctuary. The topography of the area is a semi-arid landscape and the authors say that it could go on to represent most of the semi-arid landscapes in the country. It is protected grassland, surrounded by fragments of unprotected grassland patches and agricultural lands, characterised by intensive human pressure and presence of natural predators like the Indian Wolf.  Researchers also measured the amount and quality of grass, the major blackbuck food source, and identified risky areas, where blackbuck were most likely to come across wolves, dogs or humans.

The paper explains that the food source for blackbuck is determined by changing seasons, leading to flexibility in habitat use by the animals and the creation of refuge pockets would allow blackbuck to avoid risk in landscapes with high human-use.

“Blackbuck preferred to stay in the safety of the sanctuary when food was abundant, to avoid the risks associated with humans and livestock. But as food declined after the monsoon, blackbuck began to move into riskier unprotected grasslands, thus responding dynamically to seasonally changing levels of food and risks in different parts of the landscape. As blackbucks make seasonal changes in their movements in desperate search for food, they venture into more risky areas located outside the sanctuary,” says the paper titled "Wild Ungulate Decision-Making and the Role of Tiny Refuges in Human-Dominated Landscapes".

Chaitanya Krishna, lead author of the study says, “We found that when blackbucks moved into areas of high risk, presence of small sanctuaries or "refuges" in landscapes with high human-use, allowed these antelopes to survive and forage.”

The research could be a step forward in future land-use planning.

Co-authors of the study Ajith Kumar and Kavita Isvaran say, “These factors need to be taken into consideration as more grassland is converted and developed for human use. This study shows that it might perhaps be possible for wildlife and human interests to be met simultaneously, provided that wildlife are offered well-protected refuges, such as the small protected areas that constitute the Great Indian Bustard Sanctuary.”