Dholes found in the Bek-Tosot Conservancy in southern Kyrgyzstan, a few kilometres from the Tajik border, while researchers were looking for snow leopards 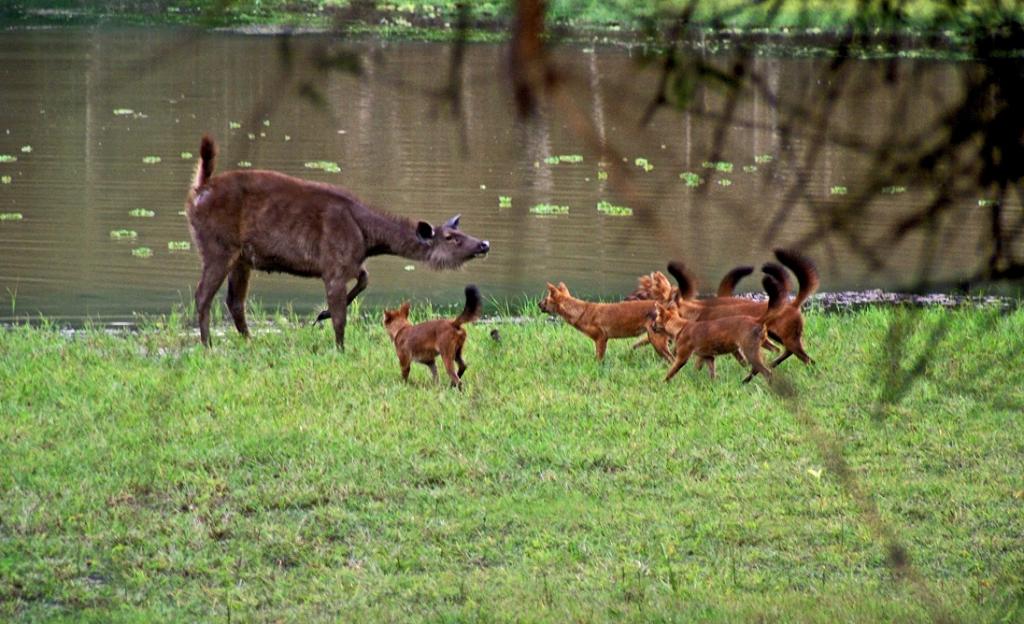 Dholes have disappeared from 75 per cent of their range and are today found in east, south and southeast Asia. Here, a pack attacks a Sambar doe in Bandipur Tiger Reserve, Karnataka. Photo: iStock

A new study has reported the presence of dholes or Asiatic wild dogs (Cuon alpinus) in the high mountains of Central Asia nearly 30 years after their presence was last recorded.

The animals have been discovered in the Bek-Tosot Conservancy in the Osh region of southern Kyrgyzstan, a few kilometres from the Tajik border. It lies in the Pamir mountain range.

Imogene Cancellare, from the Department of Entomology and Wildlife Ecology, University of Delaware, Newark, Delaware, United States, the lead author of the study, tweeted:

During non-invasive scat collection surveys for snow leopards in 2019, a scat was collected by family of a collaborating ranger in the Bek-Tosot Conservancy. Species ID was confirmed at the National Genomics Center for Wildlife and Fish Conservation in Missoula, MT. pic.twitter.com/QezJ0PSJSZ

She added that the discovery was an exciting one:

This is exciting because dholes have not been publicly reported in parts of Central Asia in 30 years. Work with local communities over the last ten yrs suggest dholes are not present in this region of the Pamir mountains.

Photo by me, taken at the site the sample was collected. pic.twitter.com/eGrpcXMhp2

We believe this is a new record of the purportedly extirpated dhole in the Chon-Alai district and marks a northward extension of its previously published distribution by approximately 1,000 km.

This, they said, suggested “sufficient prey abundance existed to support a diverse carnivore community, including the exclusively carnivorous dhole.”

The reasons for the disappearance? Dholes require more land for sustainable populations than other Asian mammals due to their complex social structure and dietary requirements.

This suggests that “habitat fragmentation and human activity may have contributed significantly to their decades-long disappearances from the aforementioned countries,” the paper said.

“Historically, dholes purportedly occurred throughout southern Russia, all across central Asia, south Asia and southeast Asia. Recent research and current distribution maps indicate that they are restricted to south and southeast Asia, with the northernmost populations in China,” Arjun Srivathsa, wildlife biologist and an expert on dholes and other canids (members of the dog family), told Down To Earth. Srivathsa was not associated with the study.

So how did the population discovered now survive undetected? The researchers suggested a hypothesis. The location of the new population is adjacent to the Tajik National Park, Tajikistan.

“Given the extreme remoteness of this region and the lack of human habitation in the northern portion of the park between the Academy of Sciences and Pamir-Alai Ranges, it is possible that dholes have persisted in a relic population or become re-established without detection,” they wrote.

They added that “although there was no available evidence in the literature for long-distance dispersal movements by dholes, we cannot dismiss dispersal as an explanation for the documented occurrence.”

The nearest dhole population to the newly discovered one according to the paper is 500 kilometres away in the remote Taxkorgan Nature Reserve in the Karakorum / Pamir Mountain region of Xinjiang Autonomous Region, China.

However, Srivathsa added: “Recent country-level assessments from China show ‘potential dhole occurrence’ all along the western border of Xinjiang. Assuming there are dholes in this part of China, then the new record reported in the paper is ~100 km away.”

What does this mean for dhole conservation in Asia? “High Asia is important for snow leopards. The confirmed presence of another apex predator (dhole), is certainly good news,” Srivathsa said.

He however noted that “this also represents a likely range-edge presence record. Conservation efforts still need to be prioritised in locations where viable populations currently exist (India, Nepal, Bhutan, Thailand) and where populations can be revived through targeted interventions (Bangladesh, Cambodia, China, Indonesia, Malaysia).”

The paper authors recommended that “future carnivore monitoring efforts in this region include surveys for dholes to confirm the possible presence of a dhole population(s). Taken together, the Pamirs may be an important landscape for dhole recovery, particularly if previous threats are mitigated.”