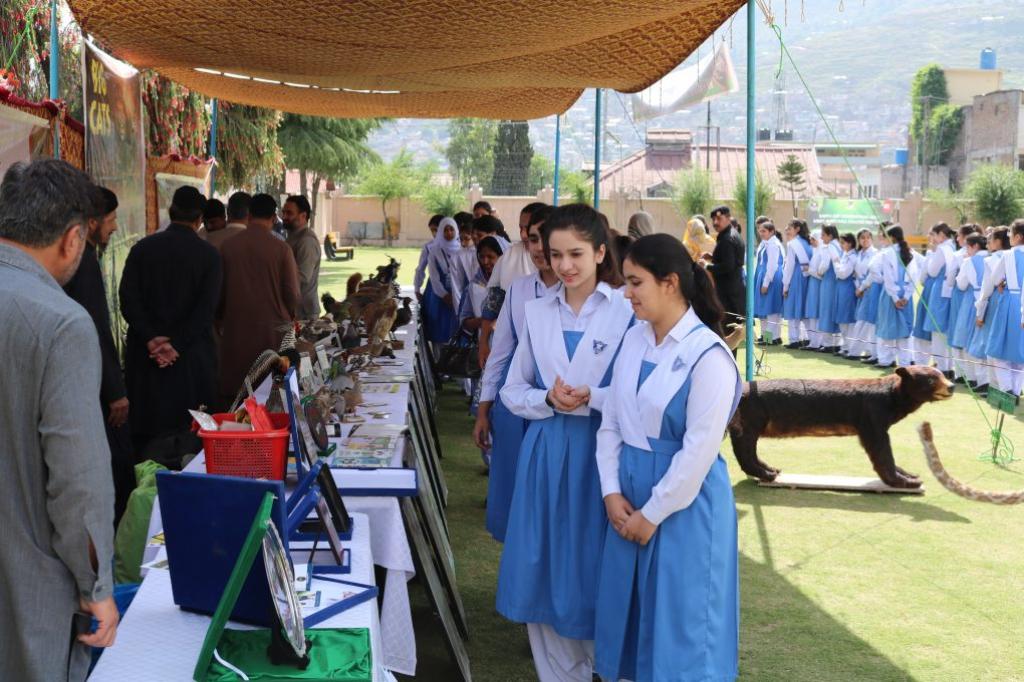 Muhammad Waqas, a teenage boy from Dehri Allah Dand village in the scenic Malakand district of Pakistan’s Khyber Pakhtunkhwa province, used to spend his free time hunting beautiful birds in the nearby mountains.

“Hunting was my favourite sport,” Waqas said. Like most adolescents of the village he used to carry slingshots and air guns and kill around 20 to 30 birds every day, he said.  “We even destroyed bird’s nests and used to bring their chicks home who then mostly died due to lack of care.”

Carrying slingshots has always been the norm in rural settlements, but no one told the boys about the negative impacts of the wanton killing of birds on the ecosystem, Waqas explained. 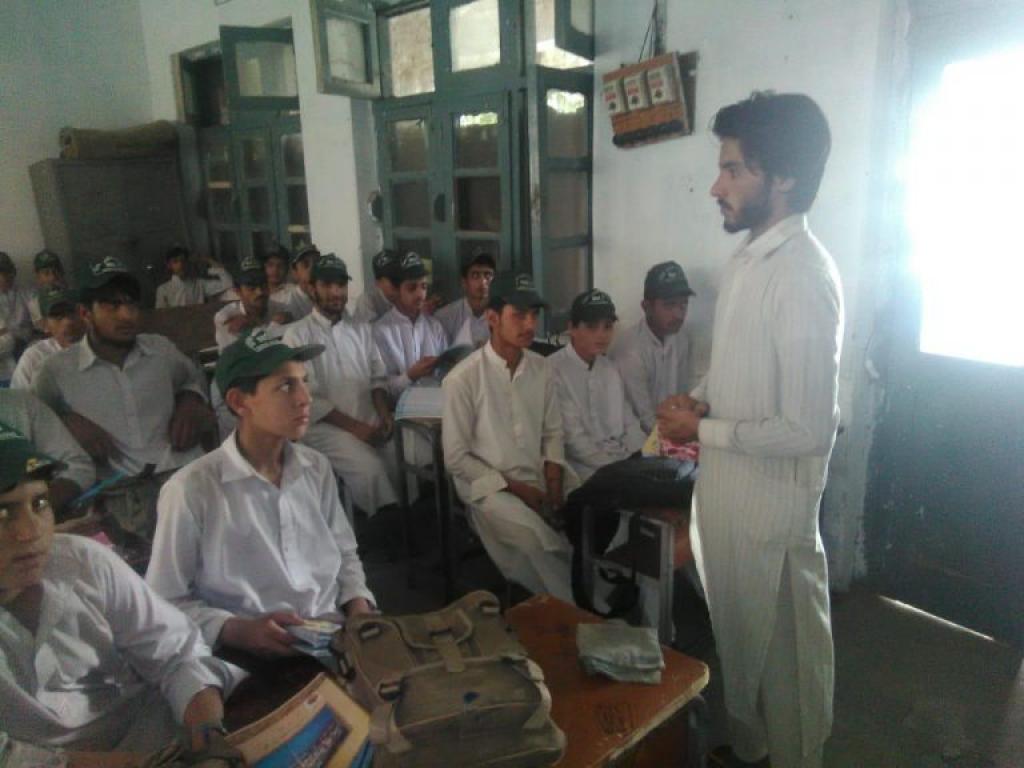 However, environmental education, as part of an awareness campaign by the Wildlife Department of Khyber Pakhtunkwa (KP), has completely changed Waqas’s approach to birds. He has gone from being a bird hunter to a “conservation advocate” in his own village.

Muhammad Waqas now heads a 23-member team of nature lovers in his village. This team patrols the area to raise awareness about the consequences of bird hunting on the environment, agriculture and biodiversity.

“We arrange visits to different parts of our village including hujras (male guest houses) to meet people, especially our peers, to apprise them about the importance of biodiversity conservation and role of every living being in maintaining the food chain,” Waqas said.

“When we see a boy with a slingshot in his hand, we try to explain to him that the loss of birds damages nature. If he is adamant on hunting, we try to purchase his toy by offering him double the price,” said Muhammad Anas, a tenth grade student of the same village and team member of Waqas. In the village it is difficult to cheat others, and use the money to buy two guns for example, because everyone knows everyone.

“Mostly we succeed in convincing fellow villagers to shun hunting, but in some cases refusals also come in the way of conservation,” Anas admited.

“Hill trekking and hunting is my passion and cannot leave my pastime enjoyment” said Arshad Iqbal, from Thana village in Malakand district. “Carrying of arms for hunting and safety is a routine practice in our region with history going back for centuries and does not seem harmful to me,” Arshad argued.

“Despite some hurdles, our efforts are bearing fruit as majority of youngsters have abandoned their hunting toys and joined nature clubs to serve as the guardians of biodiversity, Anas claimed.

Over 20% of Khyber Pakhtunkhwa is under forest cover, accounting for over 40% of Pakistan’s forests. The area is bestowed with unique biodiversity and it has seen a successful reforestation scheme Billion Tree Tsunami recently to counter the effects of climate change. But wildlife in the province faces serious threats due to illegal hunting, trade, shrinking habitats, deforestation, climate change, lack of awareness, poverty and growing human population.

“Environmental education has shown good results by raising awareness among students about the importance of every creature in strengthening fragile ecosystems,” observed Kamal Hassan, a teacher at Allah Dand High School.

There are around 2,996 villages in KP and if there are a few young hunters in every village, thousands of birds are killed on daily basis in the province, Hassan said.

The positive change in attitude to wildlife is not only confined to the youngsters of Allah Dand village. Nature clubs have been established across the province to spread environmental education among students.

Hassan mentioned an incident in the Katlang area of Mardan district, where some locals seized a pangolin, a wild species facing extinction due to hunting for its scales and meat. A student in the area saw this animal being held captive and informed his teacher and classmates.

They all rushed to the site to persuade the captors not to kill the endangered animal. They also told the captors that the pangolin is a harmless creature, and even beneficial for human beings because of its feed on termites.

After arguments and persuasion, the captors agreed to hand over the animal to the schoolteacher so they could free it to roam in its natural habitat.

The KP wildlife department came up with the idea of establishing nature clubs in the late 1990s and so far around 150,000 students have become members of the clubs, Niaz told thethirdpole.net.

“Imparting environmental education at school levels through establishment of nature clubs has shown very positive feedback across the entire province,” claimed Muhammad Niaz, the district forest officer of Wildlife Extension, Khyber Pakhtunkhwa. He said that nature clubs have been established in 200 schools in the province, and each club has around 40 to 50 students.

It starts with education

Nature club members are trying to understand environmental problems and find ways to tackle these by contributing essays and slogans for newspapers, magazines and social media. In some areas, school children design and make sign boards to help raise public awareness about environmental issues.

“After becoming aware about importance of wildlife, trees and birds, I have now made my firm resolve of contributing my energies for protection of nature,” observed Inam-ul-Haq, a ninth grade student of Government Centennial Model High School Timergara in Lower Dir District. 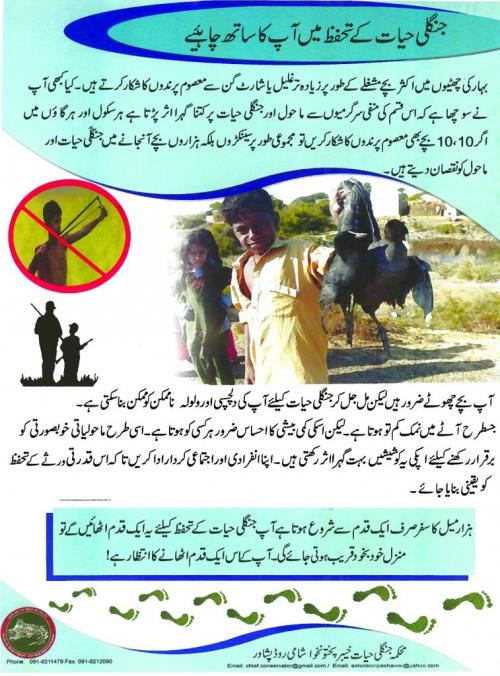 A number of school teachers have approached the KP Wildlife Department with requests from their students to establish `nature club’ in their schools.The growing interest in environmental issues among students has also led to some private schools to take part in awareness building campaigns and printing pictures of wildlife on the back of books.

The owner of `Welcome Books’, a stationary supplier to Peshawar’s biggest private school, has requested the Wildlife Department of KP to prepare images of wildlife for him to print on the back of 300,000 copy books during the current academic year.

“Without education we cannot achieve the goal of conserving biodiversity [or] adapting and mitigating the impacts of climate change,” said Tariq Banuri, Chairman of the Higher Education Commission (HEC) of Pakistan.

“This [campaign] is very useful evidence of the changing conceptions of youngsters and suggests that the awareness building program was of good quality,” added Banuri.

In its recommendations, the climate change policy document also laid stress on increasing awareness through education and strengthening capacity of relevant institutions, communities, nature conservationists by establishing nature reserves, botanical gardens and gene banks. In this, it seems, KP is being led by its youngsters.

Adeel Saeed is a journalist based in Peshawar

(This article was originally published in The Third Pole)