Supporters of an ancient tribal hunting tradition in Bengal want it to continue; critics oppose it even as hundreds of animals are killed 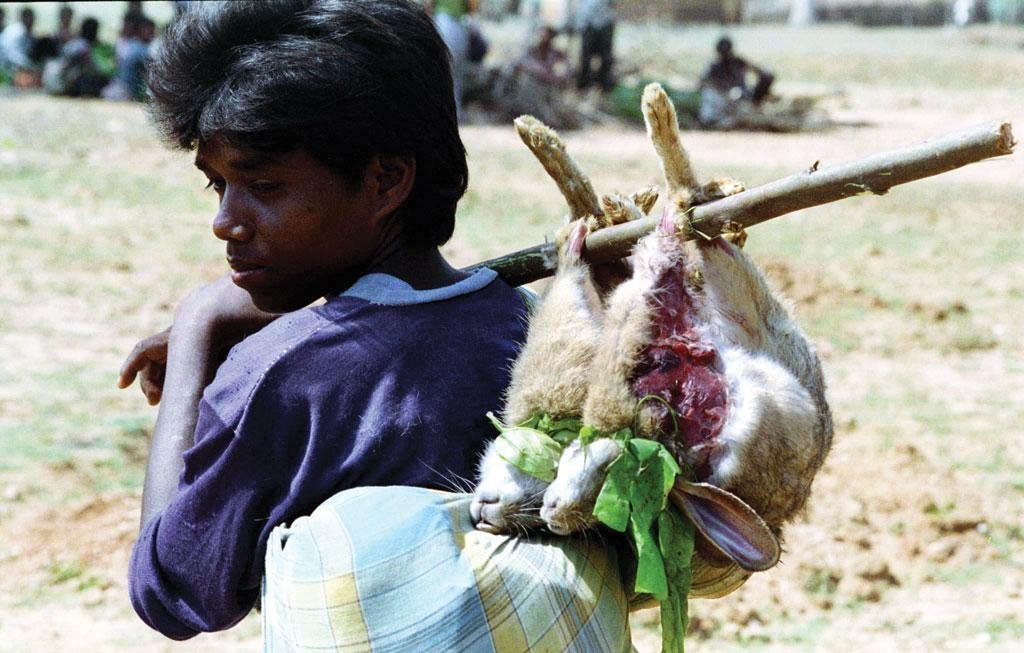 Some 200 wild animals have been killed by Adivasis in the Junglemahal forest straddling the Paschim Medinipur and Jhargram districts of West Bengal in March 2021, according to the state forest department.

The animals were killed as part of the centuries-old annual hunting season observed by Adivasis known as Shikar Utsav in Junglemahal. The killings were carried out with traditional weapons other than firearms such as spears, slingshots, bows, arrows, axes and knives.

Some 7-8,000 hunters participated in the event, according to officials. Forest officials stood at the roads leading to the forest and pleaded with the hunters that killing of animals and birds would destroy the ecological balance. Adivasi community members, however, insisted that the hunting festival was an integral part of their culture.

The forest department also conducted 11 meetings at different levels to educate tribal people about the harm caused by hunting practices.

This annual hunting season is known as Akhand Shikar and Sendra in other Adivasi regions of eastern and central India. In West Bengal, it lasts from January to June.

“The festival is a medium to teach tribals about life and social mores. It is a rite of passage, especially for tribal men. Shikar Utsav is a tradition and a lot of rituals other than hunting activities are included in it,” Prabir Mandi, a primary school teacher in the area, told this reporter.

“It should not be banned completely,” he added.

“Shikar Utsav is not only about killing animals but also about teaching the next generation about sexuality. During this festival, men dance and sing tribal songs for the whole night. The songs of the jungle not only speak about self protection but also respecting nature. Shendra Bonga is the village god whose permission is sought before the ritual starts,” he said.

However, critics of the practice, especially non-profits feel it must go.

Not everyone who takes part in these hunts is tribal or Adivasi, according to Soumodip Mukherjee, president of Bonyo, a non-profit working towards wildlife crime control.

“These hunters use religion and culture as an excuse to go hunting. The activity is not at all need-driven. They do not depend on wild meat for food and existence. In fact, the hunting is not restricted to local tribes. Hunters from long distances travel to reach the hunting destinations,” he said.

The Human and Environment Alliance League (HEAL), a Kolkata-based non-profit, has contended that “there is nothing tribal about these festivals. Clad in denims and T-shirts, the intoxicated men are out for a day of pure recreational hunting”.

The Calcutta High Court had heard a public interest litigation filed by HEAL in April 2019. It had then prohibited hunting wildlife in the garb of rituals in various districts of south Bengal.

The court had also directed wildlife authorities to work in collaboration with district administrations and the police to ensure that hunting festivals were not held.

Chief Conservator of Forests, Central Circle, S Kulandaivel who has worked for over 16 years in the area said:

Food security is not the issue. We are implementing schemes like the Mahatma Gandhi National Rural Employment Guarantee Act to create water bodies, irrigation canals, borewells and development of lands. We are employing tribals in conservation work. Through hunting, the Adivasis do not meet even one per cent of their food needs. It is clearly for fun and showing off.

He added: “We are not against tribal festivals. We are against killing.”

This is something Aniket Kundu, a professor and non-tribal, who has been resident in Jhargram for over 15 years, agrees with. He is of the view that the rituals should not be banned but the killing must.

“Many in mainstream society are able to get access to education and new ideas. But in these remote villages, tribals still follow traditions and social changes are slow. We cannot change them in a single day. We need to show them alternate ways to observe their traditions,” he said.