The pygmy hog: to the brink of extinction and back

The pygmy hog, the smallest member of the pig family, was almost wiped out, but a careful breeding programme, as well as taking care of the security concerns and maintaining its habitat, has br 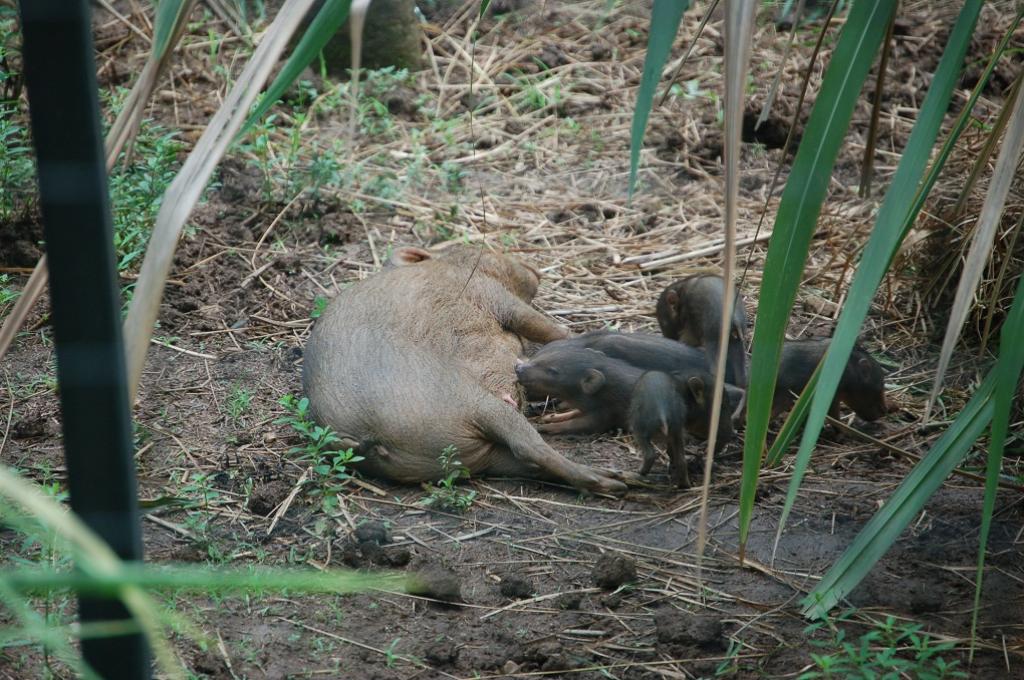 The successful breeding of the pygmy hog in captivity has been key success. Credit: Pygmy Hog Conservation Programme

The smallest member of the pig family, the pygmy hog (porcula salvania), is a critically endangered species. Once found along a narrow strip of tall and wet grassland plains on the Himalayan foothills – from Uttar Pradesh to Assam, through Nepal’s terai areas and Bengal’s duars – it was thought to have become extinct in the 1960s. But in 1971 it was “re-discovered” with a small population in the Barnadi Wildlife Sanctuary.

Even then the numbers have kept declining. They are estimated to be less than 200 pygmy hogs, half of what was estimated in the mid 1990s. The only viable population of the pygmy hog in the wild is in the Manas Tiger Reserve in Assam. A two-decade long effort to conserve this 25-cm tall animal has however turned the tide – the 110th captive-bred Pygmy Hog was recently reintroduced in the wild in the northeast Indian state.

The pygmy hog is one of the very few mammals that build its own home, or nest, complete with a ‘roof’, but maybe more important than its own attributes, is the fact that it is an indicator species. Its presence reflects the health of its primary habitat, the tall, wet grasslands of the region. One of the main reasons for its plummeting numbers was grassland degradation. A number of other endangered species like the one-horned rhino, tiger, hog deer, eastern barasingha, water buffalo, hispid hare, and the Bengal florican, are also dependent on the grasslands.

Wet grasslands also serve as buffer against floods in the monsoons, while maintaining high groundwater level in the dry season, thereby benefitting agriculture and the farming community that live on its fringes.

“It was essential, therefore, that the Pygmy Hog Conservation Programme (PHCP) follows a two-pronged action plan: conservation breeding of the animal against possible early extinction and re-introduction in selected sites, and habitat management,” said the advisor to PHCP, Goutam Narayan. While efforts, in the form of a conservation survey, had begun in the late 1970s, the PHCP took off in 1995 as a collaborative project of Durrell, IUCN/SSC Wild Pigs Specialist Group (WPSG), the Assam government’s forest department, and the ministry of environment and forests. It also has two local partners, EcoSystemsIndia and Aaranyak.

The project began with six wild hogs captured from Manas for captive breeding. “We were given permission for only six hogs. Among the six, we selected three adult females who were in the mid-term of their pregnancy—that way we could increase the genetic makeup,” Narayan said. The hogs were taken to a custom-built research and breeding centre in Guwahati, Assam, where the females gave birth to 13 young in 1996. The next year the litter grew by another 24, and by the year 2001, the total captive population had grown steadily to 77. “Since the entire global population of the pygmy hog was in one site, and because of the steady increase, another breeding centre was opened in Potasali, near the Nameri National Park,” Narayan said. For the next step, three re-introduction sites were selected after careful research—Barnadi Wildlife Sanctuary, Orang National Park, and Sonai Rupai Wildlife Sanctuary.

However, despite the 13-fold rise in six years, the cubs could not be released in the wild immediately because of security concerns in the region. Once the situation improved, efforts were then channelised towards “teaching” the captive-bred pygmy hogs on honing their survival instincts in the wild.

“The pre-release period is of five months, during which we minimise human contact so that the animal can build its own survival instinct. In 2006, when we were preparing for the first release, a pre-release site was established in Potasali. This has three large enclosures with their near-natural habitat, the grasslands, in which they are encouraged to forage naturally. Their supplementary diet is reduced gradually to 15-%, and they learn to face their natural predators… basically learn how to survive in the wild,” Narayan explained. After five months they are taken to the reintroduction site where they are kept for three nights before being released in the wild.

The importance of rescuing the habitat

There was, however, another important step—a coming-together of parallel efforts—of habitat management in these re-introduction sites before the animals were released. After all, if the issue that led to the Pygmy Hog facing extinction was not addressed, then despite everything else, the situation would have come to a naught.

The biggest challenge to grassland degradation, it was found, was indiscriminate grass burning in the dry season and livestock overgrazing. “So for two years, in 2006-07, we worked with the forest department in Sonai Rupai to tackle these two challenges. To the first issue of habitat management, we advised the forest department to resort to early burning (January-February) of grass instead of the dry season (March-May) so that the entire grassland does not burn down. We also suggested alternate year, block-wise burning with a fire-line for demarcation for better control. Overgrazing of animals was also asked to be curbed,” Narayan said. The efforts bore fruit, and the first batch of 16 captive-bred pygmy hog were re-introduced in Sonai Rupai in 2008. Over the next three years, a total of 35 hogs were released in this site.

Orang, where 59 hogs were released over a period of five years (2011-15) was the second re-introduction site. And Barnadi Wildlife Sanctuary was the third, where 16 hogs were released in 2016-17. Of these, Orang has been the “biggest success story”. “We believe that the population there has increased to 150-200; the pygmy hog has bred and spread out, and all because of proper grassland management,” Narayan asserted.

The hard work of tracking the species in the wild

Apart from the field signs of monitoring the released hogs (footprints, nests, foraging marks, droppings, etc.), some of them are radio-tracked as well—a process that has taken an unusual amount of effort. “It’s easier to tag a snake than a pygmy hog!” Narayan says. The ear tags, for example, kept coming off as the animal brushed against the tall grass while foraging. “After many attempts we now use a smaller, coin-sized implant that can be implanted just a few days before its release and the wound heals quickly.”

But it’s not just multiplication that’s keeping extinction at bay for this diminutive animal. Single Population Analysis and Record Keeping Systems (SPARKS) and Population Management (PMx) are some tools through which “suitability factor” between a couple is determined to manage the demography and genetic quality. PHCP project director, Dr Parag Deka said, “There is no hotch-potch mating. To maximise genetic diversity, specific markings through micro-chips help us zero in on the ‘ideal’ pair. The same couple breeds every year, and after a few generations, we make pairs from unrelated families.” SPARKS is a programme that stores information about the life history of each animal, while PMx offers potential outcomes, like pairings, increasing generation length, etc.

Buoyed by the positive results of the project, the experts are now working on a ‘Re-wild project’ in Manas on grassland management and restoration. The aim is that by 2025, to coincide with the 100th birth anniversary of Gerald Durrell’s – the founder of the Durrell Wildlife Conservation Trust – the ecosystem will be restored, and the pygmy hog can thrive once again.

Azera Parveen Rehman is a freelance journalist, until recently based out of Assam