Three of Namibia’s most famous lion family were poisoned – why? 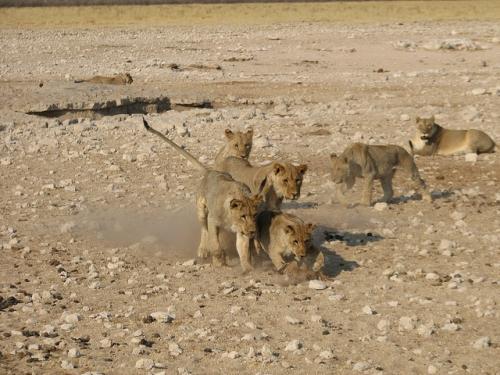 Imagine that years of drought have forced you to graze your cattle on sparse grass in an open desert landscape, far from permanent settlements. The nearest small shop is 25 miles away, a journey normally made by donkey. Now imagine your one donkey is being mauled to death by a pride of lions, only yards from the flimsy tent that is your shelter.

This was the scene I encountered in November 2015, while travelling through Purros Conservancy in north-west Namibia’s Kunene region with two elderly Khoe-speaking people – Michael Ganaseb and Christophine Tauros – in the course of oral history research in the area. Both had grown up in this desert landscape. Our small party stopped at a remote Herero cattle-post close to Tauros' grandfather’s grave. Khoe and Herero-speaking peoples both have long histories of dwelling in north-west Namibia, with sometimes different perspectives on living with indigenous fauna in the area. At this time, drought was causing Herero-speaking herders to disperse with their livestock to wherever they could find a few remnant tufts of perennial grasses.

Sheltered only by a made-in-China tent, the lone herdsman we met here was angry. The previous night a group of lions had killed his donkey. He had poisoned the donkey’s flesh in retaliation for the attack.

We related this incident to the dedicated founder of the Desert Lion Conservation Project, Philip Stander, who tracks the movement of Namibia’s special desert-adapted lions. He suggested that a group of five brothers named the “Musketeers” – stars of the 2015 National Geographic film Vanishing Kings: Lions of the Namib – may have been responsible.

A few days later I encountered the Musketeers, close to Namibia’s spectacular Skeleton Coast, while recording memories of places previously inhabited by Ganaseb’s brother Noag, and their cousin Franz ||Höeb (the two lines signify a “click consonant” in Khoe-languages). They claimed that in the past people did not have problems with “wild animals” – they would simply ask them nicely to move, so that the people could be on their way. Some elderly Khoe-speaking people continue to practice these rituals, asking both known ancestors and anonymous spirits of the dead to protect them from lions. Whimsical perhaps, but these narratives illustrate variety in local experiences of lions.

Less than a year later, on August 9 2016, three of the Musketeers were killed in Purros Conservancy by poison set by cattle farmers. These lions had been troubling people for some time. The radio collars that tracked their movements were burnt.

Tragically, only days earlier Namibia’s Ministry of Environment and Tourism had approved the transport of these three lions and their remaining brother to a national park where they would be kept apart from farmers and their livestock. But as the three lions returned from unreachable mountainous areas they encountered a cattle-post, where they slaughtered a donkey and whose poisoned flesh later killed them. The ministry is seeking criminal charges.

Although one of the worst cases, this is only the latest in a series of recent conflicts between humans and lions in the area. In June 2016, a lioness was shot dead after a bull was killed by a pride of lions near the settlement of Otjindakui. Earlier that month, the first Musketeer to be killed died from a bullet wound near a temporary cattle-post in the region.

These incidents reflect recent expansion in lion distribution in Namibia’s Kunene region. A result is economic damage, borne disproportionately by unlucky farmers. Compensation, when received, may not cover the cost of a lost cow or bull. As such, increasing lion numbers cause tour guides to celebrate while locals are dismayed.

Clashes between humans and lions in a region celebrated by tourists and conservationists have encouraged significant investment in addressing human-wildlife conflict. Community game guards were established in the early 1980s, beginning a widely praised model of “community-based natural resources management” financed by donors including the WWF and the US and UK international aid departments.

Since 1996 indigenous Namibians have been able to legally derive incomes from wildlife in recognised territories managed as “conservancies”. The vision is that this income will increase the value of indigenous fauna and flora as economically-productive resources, countering the costs to other livelihood activities of sharing land with wildlife whilst offering routes towards rural development.

The success of these conservancies, combined until recently with favourable wetter climatic conditions since the mid-1990s, has led to increasing lion populations. Efforts to smooth over resulting tensions with local people include a compensation scheme for herders paid for by safari operators; a community “lion task force” and “lion rangers” who monitor lion movements and advise herders when to move away; lion proof kraals (cattle pens); and bright lights, ultra-sound and fireworks to discourage lions from approaching settlements.

These initiatives do much to mitigate the conflict. But current drought is causing herders to overlap with lion, the former seeking dispersed grazing, the latter dispersed prey animals. Expanding tourism has encouraged lions to become more confident around humans. And prey animals like zebra and antelope already affected by drought may be reduced further by shoot-to-sell policies, whereby conservancies sell rights to outside contractors to shoot animals to supply butcheries elsewhere.

Human-lion conflicts can also act as a flash-point for other frustrations. Livestock herders in communal areas are experiencing punitive measures for trying to protect their animals in a context of historical land appropriation that squeezed indigenous Namibians into less productive landscapes. Namibia’s commercial (and still largely white-owned) farming areas sometimes experience lion attacks but benefited historically from significant clearance of major predators. One celebrated former warden of Etosha National Park killed 75 lions to help farmers protect their cattle, before being employed in conservation in 1958.

Today, wealthy visitors from afar hunt “game” animals as trophies, including the occasional lion. Many conservancies are financed significantly by trophy-hunting and tourism, and some local people succeed as hunting and tourism professionals. But these benefits aren’t evenly distributed, and can cause distrust over new inequalities linked with conservancy management and private sector investments.

All these factors contribute to the intractable nature of the human-lion conflict. This problem is not about to disappear. At the same time, local people with different histories have different ideas about how to live with lions. Learning more about positive stories of how people lived with predators in the past may yet help people and lions to live alongside each other into the future.