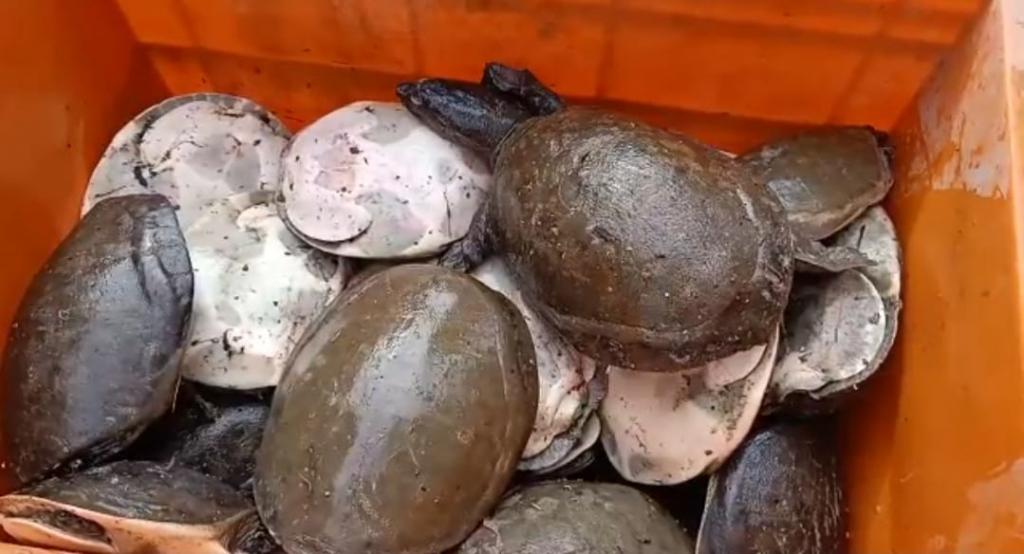 Forest officials from Odisha found 40 Indian flapshell turtles (Lissemys punctata) in baskets in an alleged smuggling racket. All of them were released into the Satiguda dam.

“Several reptile smugglers collect live turtles from local fishermen, who catch the reptiles from rivers and other water bodies in the district and nearby areas. Forest officials on June 4 had seized 150 live freshwater turtles from a village in Malkangiri district,” said Bibhuti Behera, assistant conservator of forest (ACF), Malkangiri forest division.

Many turtle smugglers have been operating in Odisha and Andhra Pradesh for the last few years. Smuggling of turtles, one of the Class 1 species of the water animal, is a non-bailable offence under the Wildlife Protection Act, 1972, he added.

Turtles are smuggled and killed for their supposed aphrodisiac properties, livestock feed, to make leather from their skins, to make potions from their blood and to use as fishing bait.

Turtles are also used for meat and medicines, the forest officer added.

The Indian flapshell turtle is a freshwater species of turtle and is found in many states.  The “flap-shelled” name stems from the presence of femoral flaps located on the plastron. These flaps of skin cover the limbs when they retract into the shell.

It is a relatively small soft-shell turtle with a carapace length of up to 350 millimetres.  Poaching for meat and cartilage has been identified as a major direct threat to the fresh water turtles as many poachers are now active to kill the turtles.

“Gangs of poachers have been using stringing up lines with multiple hooks to catch turtles, while others lure them with dead cattle carcasses on the river banks,” said Basudev Tripathy, a turtle researcher. He is also the deputy director of Western Regional Centre Zoological Survey of India, Pune.

“The fresh water turtle is a scavenger in the river, but has been in decline for a long time. Foxes and wild dogs destroy their nests. If all adult turtles are gone, the species will cease to exist, added  Tripathy.