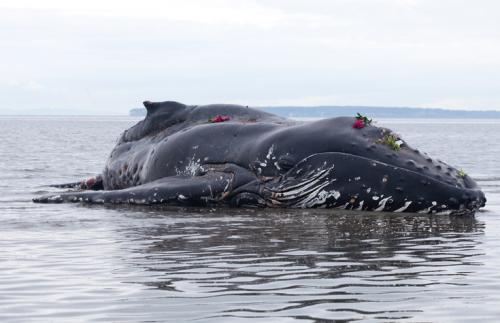 Around 600 pilot whales recently became stranded on a New Zealand beach, around 400 of which died before volunteers could refloat them back into the sea. Sadly, this kind of mass whale stranding has occurred since human records began, and happens somewhere in the world on a regular basis.

At the end of 2015, 337 sei whales died in a fjord in Chile after the largest ever beaching of whales of this species. Mass strandings can also occur in northern Europe. In February 2016, 29 sperm whales were found stranded on the coasts of Germany, the Netherlands, eastern England, and northern France, a record for this species in the North Sea.

Why do these creatures, which are masters of living in a totally aquatic environment, enter an inhospitable land environment where inevitably some, if not all, will die?

Mass strandings almost invariably involve oceanic species of whales. Long-finned and short-finned pilot whales tend to be the most frequent casualties. Other species typically are false killer whales, melon-headed whales, Cuvier’s beaked whales and sperm whales. All of these normally live in waters over 1,000 metres deep and are very social, forming cohesive groups that in some cases may number hundreds of animals.

Although it’s tempting to automatically blame whale strandings on human activity, the fact that deep-dwelling species of whales most often get stranded, and in the same locations, indicates that in many cases natural causes are more likely to be to blame. Mass strandings of these oceanic species tend to be in very shallow areas with gently sloping, often sandy, seabeds. In those situations, it is no surprise that these animals, which are used to swimming in deep waters, can get into difficulties and even if re-floated will often re-strand.

The echolocation they use to aid navigation also does not work well in such environments. So it is quite possible that the majority of such strandings are simply due to navigational error, for example when whales have followed a valuable prey resource into unfamiliar and dangerous territory. This may have been the cause of the mass stranding of sperm whales in the North Sea, some of which had recently digested oceanic squid in their stomachs.

The ratio of strandings to sightings for sperm whales in the North Sea is significantly higher south of the Dogger Bank where shallow, often sandy, environments prevail. And the same goes for Farewell Spit, Golden Bay in the South Island of New Zealand, where the recent pilot whale stranding took place and where similar incidents have occurred several times in the last few years.

However, mass strandings aren’t only caused by whales getting lost or misjudging the depth of the water. One or more individuals may be diseased and, as they become weaker, they seek shallower waters so they can more easily come to the surface to breathe. Once their bodies come to rest on a hard surface for any extended period, there is a greatly increased chance that their chest walls will be compressed and their internal organs damaged.

Occasionally, live strandings may derive from human activities, particularly military activity that involves the use of sonar. This connection was first suggested in 1996 after a NATO military exercise off the coast of Greece coincided with the stranding of 12 Cuvier’s beaked whales. Unfortunately, there was no opportunity for veterinary examination.

But in May 2000, another beaked whale mass stranding took place in the Bahamas alongside naval activity using similar loud mid-frequency sonar. A number of the whales were examined, and haemorrhaging, particularly around the inner ear, was discovered, indicating acoustic trauma.

After a similar incident in the Canary Islands in September 2002, veterinary pathologists analysing the whales also identified symptoms of decompression sickness. This suggests that the animals do not always die from stranding but may be injured or die at sea first. Many researchers now believe that naval sonar might produce behaviour in whales that interferes with their ability to manage the gases inside their bodies, affecting their ability to dive and rise to the surface safely.

Loud noise in the ocean has become a major conservation concern as humans introduce sounds of varying intensities and frequencies into the marine environment from different technologies and even explosions. Seaquakes are another source of intense underwater sound and those might also lead to physical damage or behaviour resulting in strandings, although no one has yet produced a statistical link between the two.

The kind of strandings seen in New Zealand, where very large numbers of whales become beached but a significant proportion can be rescued, also raises the question of whether some healthy animals simply follow others into dangerously shallow waters.

Many years ago, I went to the aid of two short-beaked common dolphins that stranded alive in the Teifi Estuary, west Wales. One of the individuals died quite quickly and a subsequent post-mortem revealed it had a heavy lung parasite infection, which was thought to have affected breathing. The other individual remained close to its dying companion and appeared to be in great distress, whistling frequently.

We managed to successfully refloat this other dolphin in the end and it swam away, but the incident highlighted to me the strong social bonds that can exist between individuals. When we see large numbers of whales or dolphins undertaking what appears to be mass suicide, the chances are that they are vocally responding to one another, reflecting their strong sociality.