Winged wonders: We should not resent bats, because we need them

The pandemic has magnified fear of bats, but their conservation is crucial to prevent such events from arising again

Bats evoke awe and aversion in equal measure from humans. They are the only mammals capable of true flight and have a unique sonar-based echolocation mechanism to capture prey at night.

Their ability to navigate and fly in darkness has inspired many Batman stories popular among children. On the flip side, their unique body shape, behaviour of hanging upside down, communal roosting and nocturnal habit have given rise to baseless myths and created unfounded fears leading to their persecution. The fears have become exacerbated since the novel coronavirus disease (COVID-19) pandemic.

Studies suggest the novel coronavirus SARS-CoV-2 could have originated from bats and unknown intermediate hosts and spilled over to humans at a wet market in Wuhan, China. As a result, some misinformed individuals are destroying their roosts.

To put things in context, scientists identified two bat coronaviruses (BtCoVs), named RmYN02 and RaTG13, in just one horseshoe bat species in China, with only 90 per cent genetic similarity to SARS-CoV-2. This is far less than the similarity between chimpanzees and humans. The two species of BtCoVs that Indian Council for Medical Research found in Indian Pteropus and Rousettus bats have little similarity to SARS-CoV-2.

Bats are the largest mammalian group after rodents, with over 1,300 species making up a quarter of all mammals. They occur on all continents except Antarctica and are particularly diverse in South Asia, with 114 species of insect-eating bats and 14 fruit bats, also known as “flying foxes”, occurring in India.

They roost in large colonies on trees, tree hollows, caves, rock crevices and abandoned man made structures. Bats are diverse in their food preferences, foraging on insects, nectar, fruits, seeds, frogs, fish and small mammals. They play a unique role in maintaining ecosystem structure, making a singular contribution to our food production, economy and well-being.

Bats are long-distance dispersers; often their feeding ranges up to 20 kilometre from their roosting sites. The diet of fruit-eating bats consists largely of flowers and fruits such as mangoes, bananas, guavas, custard apples, figs, tamarind and many species of forest trees.

A study by T Ganesh and Soubadra Devy of the Ashoka Trust for Research in Ecology and the Environment, Bengaluru, showed that bats played a significant role as seed dispersers for 21 forest trees in the southern Western Ghats, particularly for trees like Syzigium cumini (commonly known as Malabar plum). 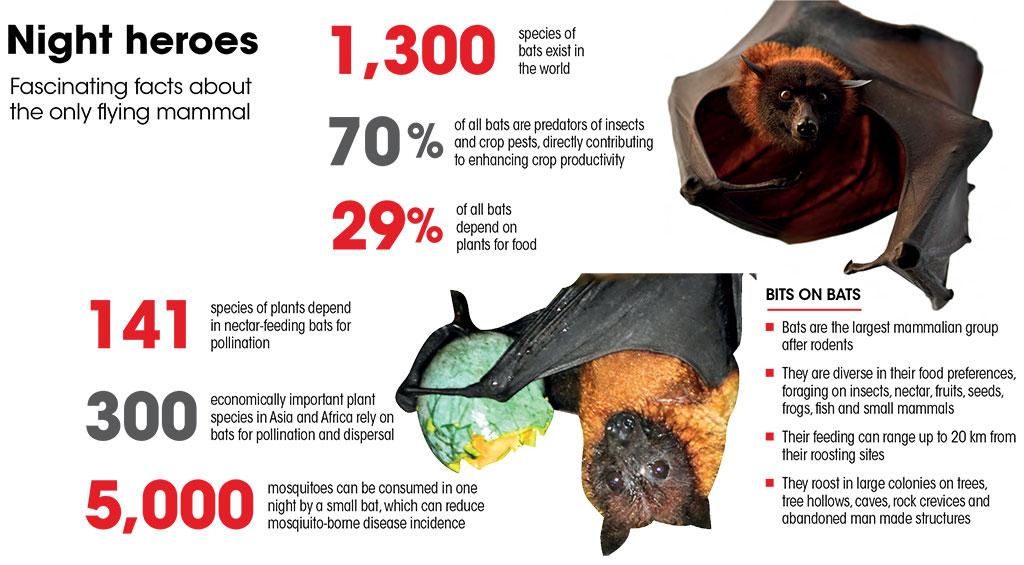 Studies have found that bats play a vital role in pollination, mainly of large-flowered plants, and in crop protection. Fruit bats (Megachiroptera) being large, require big flowers with copious amounts of nectar. About 29 per cent of all bats depend upon plants for food.

Nectar-feeding bats are major pollinators for 528 species of ecologically and economically important plants. Being arboreal mammals, bats are major pollinators of rainforest trees in the Western Ghats, as well as 141 species of fruit trees in the tropics, including economically important species like mahua, neem, wild banana and palms.

In Asia and Africa, about 300 economically important plant species rely on bats for pollination and dispersal. Bats are major pollinators for many species of mangroves which are important for coastal ecosystems and local livelihoods. Unfortunately, there have been few quantitative estimates of the contribution of bats to pollination services in agriculture and forests across India, but they are likely to be incalculable.

Insects are a major problem for agriculture, destroying up to 26 per cent of the annual production of crops worldwide every year, roughly amounting to $470 billion. Insectivorous bats, which make up 70 per cent of all bat species, are voracious predators of nocturnal insects and crop pests, thus their diversity contributes directly to enhancing crop productivity with tremendous economic impact.

For example, a single colony of 150 insectivorous bats in the United States has been estimated to eat nearly 1.3 million insects each year, contributing significantly to agricultural pest control. In the Western Ghats, 46 species of bats are insectivorous and forage actively for insects throughout the night, especially along rivers and streams where a number of insects breed.

Some large insectivorous bats are also reported to feed on small rodents. Studies have found that bats enhance crop yield consistently across landscape gradients in crops such as corn and cocoa by suppressing crop pests.

In the US, the economic value of insectivorous bats connected to the agriculture sector is about $22.9 billion a year. Another study estimates between $3.7 and $53 billion per year in agricultural losses without bats in North America.

Several species of bats, in fact, contribute to human health by reducing populations of mosquitoes and other insect vectors that spread malaria, dengue, chikungunya and other diseases. It is reported that a small bat may feed on almost 5,000 mosquitoes each and every feeding night far more than other measures adopted to eliminate them. 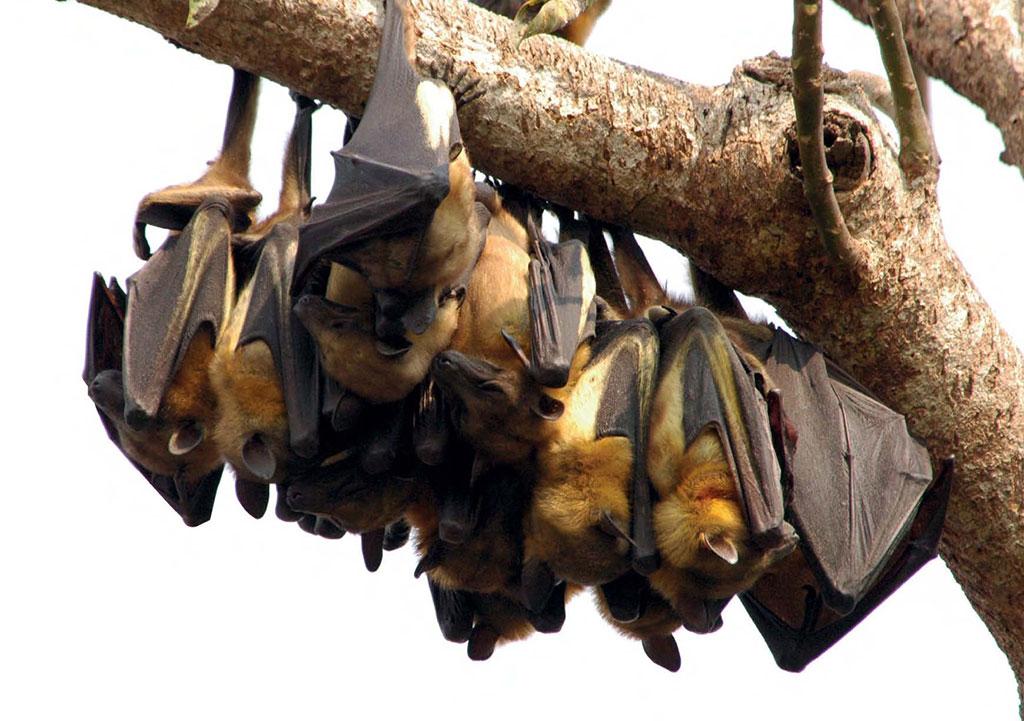 Understanding the role played by bats helps us appreciate how their absence can greatly affect all facets of our lives. Viruses don’t jump directly from bats or other animals to humans. Rather, illicit trade in wildlife, high levels of hunting of bats for consumption of wild meat, and destruction of natural habitats is responsible for this pandemic by bringing host animals into close contact with humans and amplifying the risks of spillovers.

According to the International Union for Conservation of Nature, about 5 per cent of bats are categorised as endangered and another 11 per cent are data deficient. Many more species may be threatened, while a large proportion may be of least concern as far as health risks are involved.

Perhaps because of this, all conservation plans ignore bats. Further, some species of fruit bats are categorised under Schedule 5 of the Wildlife (Protection) Act, 1973, along with other vermin species like rats, making it difficult to legally conserve them.

Bats originated in the early Eocene period of the Earth’s history, around 52 million years ago. During this long evolution, their bodies have gained resistance to viruses and other microbes. This immunity derived through co-existence has helped them safely live with pathogens.

Hunting and wildlife trade in bats, therefore, ultimately jeopardise our own safety. A more prudent approach is to avoid eating fruits partially eaten by bats and not venturing into caves and closed spaces laden with bat excreta to minimise risks of cross-contamination.

However, killing or harming bats diminishes the critical ecological services that they perform for us.

The pandemic has demonstrated that conservation of biodiversity and natural habitats is absolutely essential to prevent such events from arising again. A world without bats would not just be poorer, but also unlivable.

This article is part of the National Mission on Biodiversity and Human Well-being (Project No. SA/PM-STAIC/ATREE/Biodiversity/2019 (G)), Principal Scientific Advisor’s Office, New Delhi

Vikram Aditya is Postdoctoral Research Associate, Aravind N A is a Fellow and Sumashini P S a Senior Research Fellow at Ashoka Trust for Research in Ecology & the Environment, Bengaluru