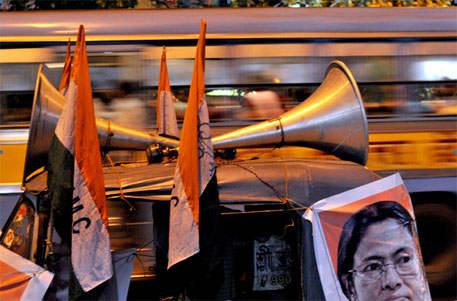 Five ordinary citizens have been killed in West Bengal between 1997 and 2011 while trying to stop bursting of firecrackers and use of loud microphones. The state which was a pioneer in introducing regulations on noise control is now bucking under pressure from firecracker manufacturers, alleged environment activists under the banner of Sabuj Mancha (Green Platform). Â´â•—â”

We have come to know that firecracker manufacturers are lobbying hard to get clearance to manufacture louder firecrackers,” said Naba Dutta, convenor of Sabuj Mancha. The state of West Bengal allows a maximum of 90 decibel crackers (measured from 5 metre distance) as against 125 decibel (measured from 4 metre distance) for the rest of India. “The manufacturers had filed appeals in the Kolkata High Court and Supreme Court but failed to obtain relaxation. The West Bengal Pollution Control Board and the state environment department, however, played an active role in this,” added Dutta. “This year, the state board has not made its stand clear when a fresh case was lodged in the Kolkata High Court by the firecracker manufacturers association, demanding they be allowed to manufacture 125 decibel crackers like in other states.”

The checks and raids on manufacturers and regular awareness drive before the festive season is missing this year, he rued. West Bengal was the first state in India to legislate on noise pollution in n1996. Justice Bhagwati Prasad Banerjee, in his landmark judgment had said, “Freedom of speech and expression includes, by necessary implication, freedom not to listen and/or to remain silent… One cannot exercise his right at the cost of and in total deprivation of others’ rights.” For the first time in the country, use of microphones was banned during night hours- between 9 pm and 7 am. The ruling formed the basis for Noise Pollution (Control and Regulation) Rules, 2000, formulated by the Central Pollution Control Board (see ‘Deafening Noise ’).

A relaxation for fire crackers will certainly hurt the ears. Every 10 decibel increase in noise level doubles its impact on the human ear. A jump from 90 decibel to 125 decibel would mean a nine-fold increase in the impact of sound. According to a 2007 study by the World Health Organization, an estimated six per cent of the population in India suffers from hearing loss. Although there is no estimate of how much of this is noise induced, the cause for concern is that noise-induced hearing loss is irreversible: the only solution is hearing aids.

A recently formed people’s West Bengal fact-finding commission on environment held its first hearing last month, chaired by retired high court judge Banerjee. It was admitted that since 1997, six people were murdered in West Bengal while protesting against environmental crimes; five of them died while protesting against loud noise. There has been little progress regarding the trial of these cases except a modest compensation of Rs 50,000 from the state pollution control board.