Workers missing from tea gardens of north Bengal and Assam

Lured by the relatively high wage rate of Rs 130 per day under the central government's flagship rural job guarantee scheme, workers of the north Bengal and Assam tea gardens are giving regular work a miss. The tea industry is in the red, given that mid-June to October is the peak plucking season. Under the Mahatma Gandhi National Rural Employment Guarantee Scheme (MNREGS), rural workers are guaranteed 100 days of employment a year at Rs 130 per day.

Voicing the concerns of the industry, former president of the Tea Association of India, D P Maheswari, announced on 16 September at the annual general meeting in Kolkata, “misuse of MNREGS had led to a spurt in absenteeism. It has reached an alarming level of 30 to 40 percent in some gardens.”  Maheswari also noted that overall tea production could touch 1,000 million kg in 2011, riding on a good monsoon. Absenteeism could bring this figure down, he says, besides affecting quality of the produce when plucking is not done in time.

“Last year the total production was 966 million kg. This year we could have easily added 30-35 million kg more. But we are expecting a production loss of 8 million kg due to non-favorable weather and shortage of labour in southern India,” adds Maheswari who is also the chairperson of the Tea Research Association.

The existing wage rate for the permanent tea garden workers of North Bengal and Assam is Rs 67 per day. “All labour unions have been demanding a raise at par with the MNREGS scheme. But despite three meetings with planters, an agreement could not be reached,” says Abhijit Mazumdar, vice president of the Terai Sangrami Cha Sramik Union and a faculty at the Siliguri college.

“Tea garden labourers are in the comfort zone of a secured job with added benefits of free housing, medical facilities and subsidized food rations. Given the high wages under the government scheme, they frequently skip work knowing that punitive action against them is a long drawn process,” thinks Sourajit Pal Chowdhury, owner of the Washabarie Tea Estate in Dooars region of north Bengal. “In the peak season we are losing at least 26 kg per absent worker per day,” he adds.

Labour unions counter these claims. “The medical and housing benefits are mostly on paper. We have been demanding a variable dearness allowance (VDA) with the wages to maintain a balance with the consumer price index. This has not happened yet,” argues Mazumdar.

Normally, the absenteeism in tea-gardens is in the range of 10-15 percent. With increasing prices workers have no choice but to work for the employment guarantee scheme which promises almost double the daily wage rate offered by tea garden owners, he adds.

At the last tripartite wage negotiations held in the first week of September 2011, the industry agreed to increase the wages to Rs 82, Rs 86 and Rs 92 consecutively for the next 3 years. ‘But with all 45 unions in north Bengal demanding a higher raise, the negotiations broke down, says Mazumdar. 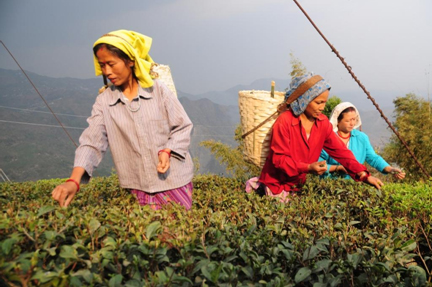 The famed Darjeeling tea gardens have been partially spared the spurt in absenteeism. The 87 odd tea gardens of Darjeeling hills increased the daily wages from Rs 67 to Rs 90 in March 2011, bowing down to the politically strong Gorkha labour union (see 'Simmering discontent over tea', Down To Earth, May 1-15, 2011). After the wage rise in the Darjeeling hills, absenteeism has decreased from 25 per cent earlier to the natural level of 10-15 per cent now, says Suraj Subba, general secretary of the Darjeeling Terai Dooars Plantation Labour Union.

Ashok Lohia, of the Chamong Group—the largest producer organic Darjeeling tea—counters Subba. “Absenteeism is still in the range of 20 per cent plus and is hurting our daily output in the peak season. The government employment guarantee scheme could be realigned so that workers can work for MNREGA during the lean season in tea gardens.” Lohia notes that during the lean winter season, absenteeism is as low as five per cent.