World lost 8 per cent of its forests in past 14 years: study

The world has lost more than 104 million ha of forest cover —an area three times the size of Germany—in the past 14 years. A team of researchers say governments world over “must take urgent action” to arrest the “alarming speed” at which intact forest landscapes (IFLs) are declining. IFLs are areas large enough to retain native biodiversity and contain no signs of fragmentation by logging and infrastructure such as roads, mining and oil or gas development.

The researchers from the Greenpeace GIS Laboratory, University of Maryland and Transparent World, the World Resources Institute (WRI) and WWF-Russia used satellite technology and advanced techniques to conduct a global analysis to determine the location and extent of the world’s last remaining IFLs. The new maps showing the location and extent of the world's intact forest landscapes are accessible on the Global Forest Watch platform, an online forest monitoring and alert system launched in February. 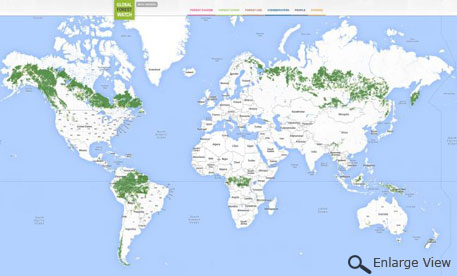 Nigel Sizer, Global Director of the Forest Program at WRI, and head of Global Forest Watch, says, “There is an urgent need for governments to heed the calls of their citizens and to respect the rights of forest-dependent peoples by properly protecting remaining intact forests. Global Forest Watch will continue to draw attention to both forest destruction and success stories to protect vulnerable land.”

The worst damage was done in the Northern boreal forest belt of Canada, Russia and Alaska, accounting for almost half the degraded land, while 25 per cent of the degraded area was found in the Amazon rainforest and 9 per cent in the Congo Basin. The researchers blame excessive human activity such as logging, construction of roads etc, for the situation.

The research comes at a time when the United Nations Environment Programme (UNEP) and the International Union for Conservation of Nature (IUCN) announced a programme to restore at least 150 million ha of forest landscapes (four times the size of Germany) by 2020. The collaboration will bring together two major ongoing global initiatives to restore degraded landscapes worldwide—the UN Collaborative Programme on Reducing Emissions from Deforestation and Forest Degradation and its 55 partner countries, and the Global Partnership on Forest Landscape Restoration.

“This collaboration will add new momentum to a mission of great significance to UNEP, which aims to reduce emissions from deforestation and forest degradation in developing countries. The economic and environmental importance of forests means that we cannot just prevent their destruction, we must also unite efforts to recover this life-supporting resource,” says Mette L. Wilkie, Director of Environmental Policy Implementation at UNEP.

Just three countries – Canada, Russia and Brazil – together contain 65 per cent of the world’s remaining IFLs. These countries also accounted for over half of all IFL degradation with road building, often linked to logging and extractive industries, being a key driver.

Deforestation in the Himalayas: myths and reality

Deforestation around the world