During her visit to Indore, Aparna Pallavi tickles her taste buds with crispy fried purple yam or garadu and discovers the health benefits of the delicacy when boiled 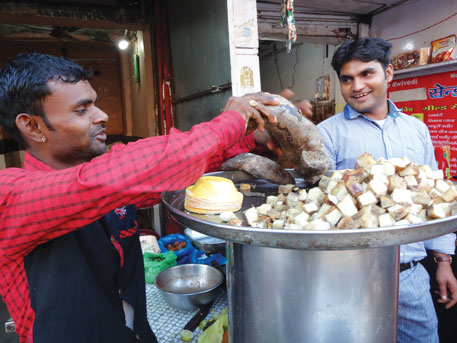 At anygiven time of the year, Indore is a great city for food lovers. The famous Indore ke namkeen, its amazing variety of gajak, street-food havens like Chappan Dukan where you can enjoy sinful delights such as the heavy, sweet shikanji and as many kinds of chaat as you can think of… Indore has it all.

But winter is a special time for a foodie to be in the city. Reason? October to March every year is the season of garadu (Dioscoreaalata or purple yam), a delicacy Indore loves. It can be seen stacked in rows after rows at vegetable stalls in any market in the city. A trip to Indore during these months would be incomplete without tasting crispy, fried cubes of garadu sprinkled with the city’s signature hot and tangy spice, jeeralu masala.

My first brush with garadu, however, happened not in Indore but in Maikal hills in Madhya Pradesh’s Dindori district, home to the reclusive Baiga tribe. In these hills, purple yam is known as ratalkanda. This is not to be confused with shakarkand (Ipomoea batatas or sweet potato, which is known as ratalu in some Hindi-speaking areas). Kanda, a collective name for yams and tubers, are significant for the Baigas. They grow and consume a variety of wild tubers during winter to keep themselves warm.

Ratalkanda does not have many healing properties compared to other yams, but it is considered warm. “It is filling and you don’t need to eat any grain when you have it. You don’t get cold, cough or aches if you have enough kandain winter,” says Hariaro Bai Deoria, a Baiga matriarch from Talaidabra village.

The Baigas prefer ratalkanda either boiled or roasted. Chopped into large chunks, the yams are boiled with the skin or roasted in the hot ashes from firewood-fuelled cook stove. The thin, outer skin is then delicately peeled, and the flesh, along with the purple inner skin, is eaten without condiments. This has a gritty texture as if fine grains of sand were sticking to the flesh. “We do not mind the grit because the coloured part is healthy,” Deoria says, handing me several chunks on a leaf.

Research, though sparse, corroborates tribal wisdom. A 2009 paper by S Misra of the M S Swaminathan Research Foundation, published in the Food and Agriculture Organization’s Plant Genetic Resources Newsletter, confirms the medicinal values of yams. According to this paper, not only do yams ensure food security for tribal people during winter, but are also useful as stimulants, expectorants, carminatives and tonics.

These beliefs are prevalent in Indore city, too. During my visit, I was trudging through a vegetable market with a bad cold. “Have a plateful of hot, fried garadu and you will be better tomorrow,” said Yam seller Ram Manohar Pugalia, offering me the delicacy.

Feisty Indoris are not a big fan of boiled yams. Indore is a city that likes its food fried. My friend, Saroj Misra, an Indore-based textile researcher who taught me to prepare fried garadu, sums it up accurately: “In Indore, samosa and kachori are part of people’s daily diet and namkeen is a prominent part of meals.” No one could care less about the nutrients lost when the yam’s inner skin—red or purple when uncooked—is peeled off. The catchword is taste, which comes from oil-soaked crispness and a generous sprinkle of mouth-burning jeeralu masala.

Having tasted both the versions of purple yam, I am hard put to choose. My urban taste buds lean a little towards the Indore style. But years of experiments with central India’s tribal food and low-spice cooking from my ancestral land of Chittagong in Bangladesh has reformed my idea of food, and the Baiga version would win my vote. But then, what is cooking without variety? Indore has the right if it wants its yams fried.