‘You may like to make sure that PIL does not succeed’ 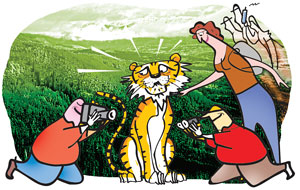 MADHYA Pradesh’s forest department seems to share a cosy relationship with resort owners and tour operators. On September 14, H S Pabla, chief wildlife warden of the state, wrote an e-mail: “A Public Interest Litigation (PIL) seeking a ban on tourism in core areas of Madhya Pradesh’s national tiger reserves has been filed in the state High Court. Though the state will oppose this, you may like to file as affected parties to make sure that PIL does not succeed...Kindly take appropriate steps.”

The recipients of the e-mail included an international tour organisation, Travel Operators for Tigers; renowned tiger expert and ornithologist Hashim Tyabji, who is a partner in a resort in Pench National Park; and Taj Hotels.

According to wildlife experts, regulation of tourist activities in protected areas is a key aspect of conservation. “It is unfortunate that violation of conservation laws is assisted by the conservators only,” said Ajay Dubey, secretary of Prayatna, a non-profit in Bhopal.

Prayatna filed the PIL on September 8. After receiving Pabla’s e-mail, the state’s wildlife tiger project guide association approached the High Court on October 22 as affected party. In its application, the association said, the argument of banning tourism inside the core areas of the national tiger reserves is baseless and misconceived. “Tourism is important for our livelihood and tourists help in patrolling the reserves,” it said. On December 16, the court adjourned the matter till next hearing on January 19. When asked about the email, Pabla said, “It is my responsibility as the state government’s representative to communicate the matter to all stakeholders.” He refused to talk further, saying the matter is subjudice.

Section 38 of the amended Wildlife Protection Act, 2006, says core areas in tiger reserves should be kept inviolate. As per the National Tiger Conservation Authority (NTCA), which was constituted under the Act, inviolate means any activity except management intervention is prohibited in the core areas.

“Tourism in itself is a management tool for conservation,” said Pabla. “Even the state government has maintained that tourism is important for the state. It helps in earning revenue which could be used for conservation activities,” said an official of the state forest department asking not to be named.

A statement filed by NTCA in the Madhya Pradesh High Court states that core areas would not be used for any form of tourism.

Rs 150 crore and no results

The amendment also seeks for the notification of core and buffer areas of tiger reserves. The Ministry of Environment and Forests has been allocating funds to Madhya Pradesh under a tripartite agreement between the environment ministry, NTCA and state governments.

The conditions for the financial assistance include notification of core and buffer areas, regulation of tourism, and preparation and implementation of tiger conservation plan. Under the agreement, Madhya Pradesh has received about Rs 150 crore between 2005 to 2009, according to Prayatna.

“Even after receiving the funds and repeated reminders from NTCA and prime minister’s office, the state has not completed the notifications and the tiger conservation plan is also not ready,” said Dubey of Prayatna. Of the state’s six reserves, the core area of Sanjay Dubri Tiger Reserve remains to be notified while buffer areas of only Kanha, Pench and Bandhavgarh ti ger reserves have been notified.

“The notification of buffer areas was done hurriedly after the PIL,” pointed out Siddharth Gupta, counsel of Prayatna. Accor ding to a source, a number of senior officials in Madh ya Pradesh’s forest department have acquired land illegally inside the state’s wildlife protected areas.

Madhya Pradesh is not the only state where tourism is hurting wildlife. Mushrooming resorts have choked the Kosi river corridor in Corbett National Park in Uttarakhand (see ‘Trespassers allowed’, Down to Earth, June 15-30, 2010). In Rajasthan, the forest department is trying to relocate residents from Kankwari village in the core area of Sariska National Park to protect tigers and reduce man-animal conflict, while it is renovating the Kankwari Fort in the village for tourism.

Sariska forest officials deny this, but H M Bhatia, chief wildlife warden of Rajasthan, was quoted in a weekly saying that the renovation was funded by the state tourism department to promote eco-tourism. Bhatia later denied making any such comment.

A few kilometres from Sariska, resorts are flourishing in and around the Ranthambore Tiger Reserve, flouting the Supreme Court’s order that there should be no commercial establishment within the 500-metre boundary of the reserve.