A can of worms

In August 2003, the ceos of Coke and Pepsi addressed a joint press conference. This unlikely meeting of minds was forced upon by an emergency. Centre for Science and Environment, a non-profit in Delhi has exposed dangerous levels of pesticides in soft drinks. Three years later, soft drinks were again in the firing line. Centre for Science and Environment again. This time Coke did not close ranks with its old competitor. It played Willie Wonka. The beverage giant announced its units were open to inspection. It was a home-grown strategy, developed in the early years of this century. Under fire from whistleblowers in Atlanta, the company decided to display its latest concoctions.

The strategy was replicated in India, albeit on a smaller scale.Coke also hitched onto the corporate social responsibility bandwagon. Journalists were invited to visit Coke's rainwater harvesting plants. Many of them wrote favourably. The soft drinks weathered the crisis much better this time.

The early years of this century brought time to many brands. There were worms in a cache of Cadbury chocolates and uti almost went bust--questions that had a generation of managers schooled by Peter Drucker textbooks fumbling.

To their credit, not for long. Brands Under Fire is about how they coped. But the contributions here are almost entirely by advertising honchos. So was the resuscitation of the brands the work of media glitz. To an extent yes. The Khans and Bachchans of Bollywood and the cricket stars pitched in with their assurances.

But brand ambassadors are not enough to sell products. Cadbury indeed de-glamorized itself. Gone was the fizzy-haired model breaking into a dance in the middle of a cricket pitch. In came Pappu--Amitabh Bachchan, alright but in a de-glamorized role. The middle class identified with the middle-aged bumbling Pappu's attempts to pass secondary school. Cadbury seems to be attempting to strike a deeper chord in these days of recession by advertising chocolates as a pay day candy.

Soft drink majors went heavy on fruit drinks. This is where Brands Under Fire leaves us wanting. Since the book is primarily about the battle for consumer trust, a few consumer surveys would have done the volume some good. For instance, did mothers try to shift the family to consuming fruit juices instead of colas? 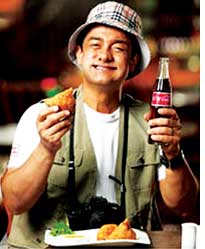 Civil society groups are likely to punch more holes in brands in the coming years. And who can say they have not learned from the battles. They might have an ally in the Internet. Already civil society groups are taking the battle to Twitter or on Facebook. The future big fights are not likely to be won on TV. Civil society groups might find the equalizing character of the Internet to their advantage. Brands Under Fire could have done well to give us introduction into how advertising plans to deal with new media. I can speak from experience they are aware of the challenge.

Amitabh Bakshi has worked in the advertising industry. He is on a sabbatical now