A love affair with ocean

In the late 1980s, US scientists discovered an organism in the Atlantic Ocean.

Later research revealed the organism, christened prochlorococcus, as amongst the most plentiful on the earth. It’s also a veritable trove of oxygen. In recent times, scientists have made attempts to stimulate the growth of prochlorococcus but their efforts have come to nought.

This is among the interesting nuggets of information in Simon Win chester’s Atlantic: Great Sea Battles, Heroic Discoveries, Titanic Storms, and a Vast Ocean of a Million Stories. His love for the ocean began on a voyage from his native England to Canada in 1963. Through the seven-day journey, the youngster clutched a ticket that had taken him six months to save up to buy.

A chance encounter with a traveller a few years ago rekindled the British writer’s love for the ocean. Winchester recounts the Atlantic’s growing importance as the waterway uniting Europe and the nascent Americas.

Exactly which European explorer first managed to cross the Atlantic and reach the New World has been a matter of contention. Winchester believes it was a Scandinavian, Leif Eriksson and not Christopher Columbus or Amerigo Vesspuci.

The British writer digs out archival sources to reveal that Eriksson beat the explorers by about 500 years. But Phoenicians—people from West Asia—beat Europeans by many centuries.

The ocean for them was a source of snail, Haustellum brandaris, a creature that releases purple dye. Such was the lust for purple garments that the dye cost 20 times as much as gold. The Europeans brought both depredation and technology. 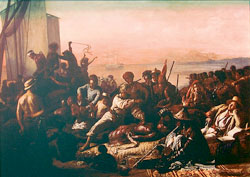 Winchester takes us to the slave trade, during which “eleven million Africans were carried westward across the Atlantic between the 15th century and the end of the 19th century.”

He shows the Atlantic became centre point for communications from the 18th century. In early 18th century “a Londoner who posted a letter on the first of January could expect it to be read in New York City in the third week of February”.

By the end of the century that span shortened when telegraph cables were laid across the ocean floor. Winchester concludes with a sickening description how the age of exploration of the great sea turned it into an overfished waterbody.

The Deepwater Horizon disaster, Winchester points out, serves as only the most recent and despicable example of human greed pounding on these vital waters.

Prakash Kanitkar is a doctoral candidate at the University of Rochester, USA