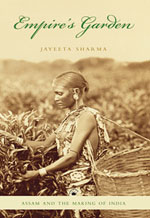 Assam and its notion of nationhood

Assam, like the other north-eastern states, has had a long-standing grouse about being marginalised in popular and academic discourses. Jayeeta Sharma’s Empire’s Garden: Assam and the making of India is a step towards addressing this grouse.


Through her analysis of archives and colonial documents, and discussions with local people, Sharma tries to trace the origin of the notion of “Assamese nation” along the lines of ethnic, religious and linguistic identities. She realises it was the discovery of native tea by the British that set forth the process. Using arguments of “science”, “social improvement” and “economic and industrial development”, the colonial government appropriated, accumulated and reserved vast stretches of forests, village commons and farmland for setting up tea gardens in Assam. The idea found resonance with the elites who extended their support to British planters.

The author notes that the programme was initiated in the period following the abolishment of slavery. The work culture and ethics of the local labourers did not satisfy the “industrial” and “production” demand of tea gardens, and the labourers were quickly branded lazy, opium-addicts and too attached with their land. At such a juncture they discovered “tea-coolies”, natives of the central and eastern Indian forests. They were “obedient”, “compliant” and “hard working”. The British thinkers attributed these traits to the races of “tea-coolies”, but the author argues that such servility and discipline was the result of dispossession of their land and livelihood for long, which had left them with little option. The period between mid 19th and early 20th century witnessed resettlement of these indentured coolies in large numbers, introducing a new ethnic community into Assam. Although lured by work and better pay, the working conditions of the tea labourers remained abysmal, punishing and ghastly. They were ostracised both by the British planters and local residents. 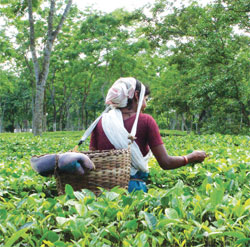 The heightened economic activity resulting from tea plantations and colonial policies, such as “Bengal’s Division” of 1905, also opened up opportunities for people from other professions, such as the Nepali graziers, Marwari traders, East Bengali peasants and Sylhetti clerks, who migrated to the fertile Assam valley. This added to the ethnic complexity and eventually gave rise to political mobilisations based on linguistic and communitarian identity.

Interestingly, Sharma writes, the colonial economy and polity created avenues for another kind of movement, whereby the Assamese elite would undertake “secular pilgrimages” to Calcutta, then the epicentre of social and political reform and cultural and intellectual activity. This opened up new cultural and ideological vistas. The distance from their homeland also ushered in the spirit of commonness and unity among them. They discovered a common “motherland” and a “language”. Upon homecoming, they created a unique identity of an ancient Assamese nation based on language, “buranjis” or written histories, educational reforms, folklore, literature, spiritual icons and historical heroes. However, the author says, these notions of identity were closely knit around the greater Sanskritised and Indic order to distinguish themselves from the influential Bengali culture with which they share the script, from the tea-coolies and the “head-hunting” jungle tribals with whom they have shared the geography.

The fate of Assam in the post-colonial era, the current state of its tea industry and how the “tea-coolies” continue to be marginalised and poor is, however, dealt with abruptly in a short conclusion. The rich details are let down by poor editing, redundancy of information and sloppy errors and omissions. On pages 157 and 158, citing the rise in opium sales and excise revenues, Sharma writes “the price almost tripled, from Rs 14 in 1860 to Rs 26 in 1879 and Rs 37 in 1890”. This leaves out important details about the unit against which the price is quoted. The book deserves a wider readership because of detailed local history, particularly of less documented personalities. But a “heavy academic” narrative might deter some.

Rajkamal Goswami is with Ashoka Trust for Research in Ecology and the Environment, Bengaluru