The river Kosi rises in the high Himalaya and ends in hydraulic despotism. Dinesh Kumar Mishra's Trapped Between the Devil and Deep Waters, which combines meticulous research and 25 years of deep personal involvement with the Kosi basin, provides a detailed account of the origins, methods and consequence of the despotic edifice that presides over the inundated detritus of the northern Bihar flood plains. In 1954, invoking dubious claims and using devious means, the Indian water establishment began constructing embankments on the Kosi to control floods. The consequent absence of floods would necessitate canal irrigation and therefore the Eastern Kosi Main Canal and the Western Kosi Canal, with headworks in India and Nepal, were constructed.Henceforth, the Kosi, which has a tendency to wander from west to east and back again, was required to limit its flow to the officially sanctioned channel between the embankments, disregarding the engineering consensus that had hitherto prevailed of letting the river spread itself lightly over the flood plain.

An estimated 9,87,818 people in 100,000 hectares (ha) trapped within these embankments, face the annual fury of a river whose peak discharge is now forced through an attenuated fluvial span. The onrushing water, carrying enormous sediment load, periodically attacked and breached the embankments from 1963 onwards. Finally in August 2008, the Kosi broke free at Kusaha in Nepal's Sunsari district, 13 km north of the Birpur barrage, demolished spurs, breached the eastern embankment, swirled out of its elevated bed and hurtled east and south, submerging six districts of Bihar and dislocating some 3 million people. This is the apocalypse that observers of the project, like Dinesh Mishra, have been warning of repeatedly, including in this volume.

Mishra provides a long catalogue of the miseries inflicted and returns extracted by the establishment of politicians, bureaucrats, engineers, contractors and suppliers. The Water Resources Department, in charge of this cyclopean nightmare, cannot maintain it. Yet it collects revenue for the water it does not deliver to people who do not want it, anyway. The department's revenue directorate collected Rs 39 crore and spent Rs 77.21 crore on its own upkeep between 1991-92 and 1995-96, while the engineers spent nothing on canal maintenance in the same period and incurred a cost of Rs 4,297.95 crore on their own maintenance. The nexus of pelf that thrives on the Kosi project is evident from the Rs 2.86 crore spent between 1972-73 and 1975-76 on the repair of the breached Bhatania bund, built at a cost of Rs 3.16 lakh. 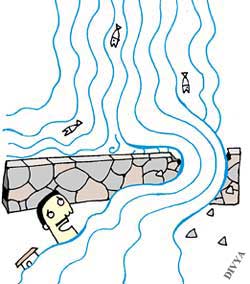 The trail of destruction unleashed by the Kosi project that the book describes, speaks volumes for Mishra's research. The grudging, delayed and partial rehabilitation offered to people between the embankments was so pitiable that they returned to the wreckage from which they had fled.

A once-productive multi-crop agriculture, with a range of adapted cultivars, and animal husbandry have been crippled. Farmers lost control as engineers fixed cropping schedules. The science of managing floods is being replaced with the tribulations of flood control. The oral testimonies that Mishra has gathered suggest the possibility of improving life without the embankments. For that, a legion of white-collar vested interests will have to be uprooted and new generations have to learn to adapt to the natural cycle, with appropriate help from technical experts. Mishra's book is timely, though more careful proofreading would have been useful. However, that should not matter much to those who need to heed his logic but have ignored it too often.