Book One Valley and A Thousand Dams, Nationalism and Development

Though the controversy over the impact of dams has taken much print space, deeper understanding of how dams entered the imagination of the entire nation from 1940 to the early 1960s, and especially after independence, has been elusive. The book under review aids our understanding of dams in particular and the development rhetoric of post-independence Indian governments in general.

The book demonstrates how dams and the idea of multi-purpose river valley development (mprvd) dominated the discourse of development and 'the march of democracy' by exploring the 'world view and motives' of prominent Indian and American technocrats, especially the development professionals employed by Indian agencies in various dam projects.Americans Arthur Morgan, David Lilienthal, Harcourt Morgan, W Voorduin, and Harvey Slocum are featured, as are Meghnad Saha, Sudhir Sen and A N Khosla.

The book goes on to trace the development of the Tennessee Valley Authority (tva) and its implementation in the us. The author takes pains to traverse the maze of 'imagined' representations of development models purveyed by American planners, and shows that the tva model was given a coherence in retrospect, which it did not initially have. It further shows how American liberals like Lilienthal could see the Tennessee in rivers all over the world, and how the tva and its popularity in the world were invoked in the internal politics of usa.

More significantly for Indian readers, the author shows how Indian planners and technocrats re-imagined the American idea of mprvd. While third world countries like India could take advice from a cross-section of American dam experts, they chose to consult only a few because of their own viewpoints about development. The selective appropriation and articulation of aspects of tva while ignoring the complex politics associated with it, created a completely different model in India which the author calls simulacrum--claiming to reproduce something that in actual fact does not exist. While Indians imagined the tva as an apolitical technocracy, it was in fact the product of very un-technocratic political maneuvering. Damodar Valley Corporation (dvc) could not succeed because of this selective and flawed understanding of tva's history. The corporation could not maintain its authority to defend the rationalised, technocratic holism of the Voorduin plan, and unlike the tva failed to remain independent from politicians and bureaucrats of newly independent India.

American and Indian dam planners also sought to weave into the rhetoric of dams and development their own construction of nation and nationalism. While the tva and other New Deal-inspired dam projects were part of a 'reformulation of American nationalism', in India dam-building was a way to assert the modernity, legitimacy, and power of the newly independent nation, and more importantly of the nationalists who directed it. These assertions were directed at middle-class elites, who manipulated the development initiatives of the state to their own ends. The poor, for whose benefit, these projects were ostensibly launched, failed to benefit while paying a heavy price. 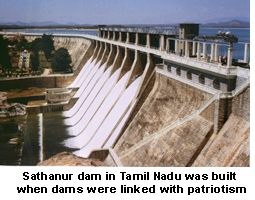 The book is important on three counts. First, it draws on existing works on the history of tva and dvc, the role of science and technology in the discourse on nationalism, and biographical works on important scientists and technocrats, to create a new perspective on the connection between political culture, social engineering and management of nature. Second, it is yet another scathing critique of large state-led developmental projects. Third, the book begins from where some earlier studies (especially by environmental historians) ended, and tries to complete the story of dams.

The only limitation of this book is its lack of detailed analysis of the mindset of Indian politicians. It is only at the end of the book that a few pages are devoted to how they responded to the rhetorical accounts of dams put forth by technocrats, and how they used this rhetoric for their own political purposes. It is a must-read for academicians, activists, policy-makers, engineers and technocrats, especially the last three as they continue to embrace gigantism.

Praveen Singh is visiting fellow at Centre for Interdisciplinary Studies in Environment and Development, Bangalore