On February 3, 1975, a man jumped to his death from the 44th floor of the Pan American building on New York's Park Avenue. He was soon identified as Eli Black. A little over five years earlier, Black had taken over the United Fruits Company, a buccaneering us outfit founded in the 19th century and largely responsible for the banana's current worldwide popularity. Various reasons were advanced for Black's suicide. Some ascribed it to United Fruits' declining fortunes. Others saw it as the act of a conscientious man, not able to swallow his company's murky dealings.

In this book under review, British journalist Peter Chapman travels back in time from Black's death to lift the lid on a purveyor of early capitalism, whose sleazy political dealings in Central America introduced the term, "banana republic" to the English language. The story began in the 1860s when Minor Keith, an itinerant us engineer, started building railroads in Costa Rica. He diversified into banana plantations and built on us government-sanctioned land grabs in Central America.

By the end of the First World War, United Fruits had carved out an empire that stretched from Colombia to the Caribbean islands of Jamaica, Cuba and Dominica. The elites of the original banana republics had been bought over and the us government persuaded to support a coup in Honduras. Competitors, producers and distributors were either bankrupted by price manipulation or bought for a song. A strike by Colombian plantation workers was quashed at the company's behest by the country's army, and 1,000 demonstrators were gunned down. 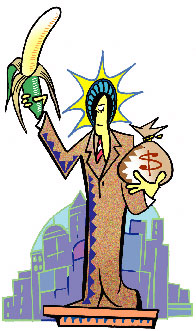 Banana's near-universal availability by the second half of the 20th century was predicated on United Fruit's near-monopolistic control of production and ruthless exploitation of fresh markets. For many years the company was called El Pulpo, the Octopus, in reference to its tentacle-like hold over Central American politics.

Chapman's cast includes Central American dictators, Manuel Bonilla and Tomas Guardia, the upstart Russian Samuel Zemurray, Theodore and Franklin Roosevelt, and even Carmen Miranda. We learn how United Fruit influenced us policy towards Latin America: from the Gunboat Diplomacy of the early 20th century to Franklin Roosevelt's Good Neighbor Policy to Ronald Reagan's Iran-Contra shenanigans, Chapman's story mirrors the flow of us policy towards Latin America over the past century.

His account of the cia- United Front manipulated coup d'etat in Guatemala in 1954 strikes a contemporary chord. Managed with aplomb by the country's ambassador to the Central American country, Jack Peurifoy, it featured contrived incidents and propaganda directed at both a communist-fearing home population and a pre-industrial Mayan people. What brought about the wrath of United Fruits and the cia was President Jacobo Arbenz Guzmn's attempt to distribute uncultivated lands owned by United Fruit to landless peasants. The putsch went as the banana company and the us president David Eisenhower had desired. Guzmn was ousted. Among the coup's first victims were 45 United Fruit plantation workers. Seven years later, United Fruit paid back its debt to the cia by donating two of its ships to the Bay of Pigs invasion of Cuba.

The banana company was overtaken by the economic crises of the 1970s. After Black's suicide, United Fruit fell apart. The company was rechristened Chiquita in the 1980s. Supremely docile compared to its earlier avatar, it remains a key player in the invidious network of the global food corporations, powerful enough to force the wto and the European Union to abandon support for small planters in the Caribbean.

Chapman does well in unpeeling the sleazy part of the banana. But his attempt to paint United Fruit as the prototype of the modern multinational is somewhat lost in his rollicking prose. He would have done well to link the United Fruit story with the larger question of corporate control over us policy and of imperialism in general. There are substantial indications of that in the sleazy dealings of the banana company. But it's a story that leaves one yearning for more. Perhaps Chapman will complete his moral audit in another book.