While launching the National Rural Employment Guarantee Act (nrega) in Andhra Pradesh on February 2, 2006, Prime Minister Manmohan Singh said, "The programme would unlock the potential of the rural poor to contribute to the re-construction of their environment." After more than a year of its operation across 200 back districts (with 130 more districts recently included under the act), the author KS Gopal adds a critical look at the implementation of nrega.

He notes, "there is a genuine fear that while nrega confers a right to employment to the workers, it could be actually be much the worse, as the onus is now shifted to the workers to seek work and officials have no responsibility to take pro-active mitigation measures." A guarantee of 100 days of employment at minimum wages each year for households cannot help much in lifting the household above the poverty line. 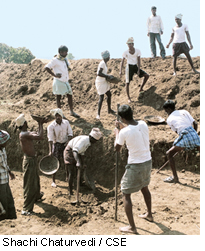 The so-called 'middlemen' present in the implementation of other anti-poverty schemes are missing but most 'assets' created at the village levels have contributed 'little or nothing' to creating livelihoods of the poor. The book blames market forces for improper land management practices in the country. In unequal encounters of rain-fed agricultural commodities with the markets of finance, technology, patenting, standards, the development of rain-fed areas has been downgraded to 'livelihood' issues, without much understanding of market dynamics.

By trying to link the issue of food security to nrega, the book suggests a more effective channelling of the programme's resources. Merely providing wages as in nrega would not lead to tackling hunger, it argues. If food issues are not centre-staged in nrega, hunger will continue to stalk the rural people.

This book is a recommended first analysis of implementation of nrega.