In the early and mid- 1980s, Doordarshan news would sometimes show pictures of celestial bodies taken by the US spacecraft Voyager 1 and Voyager 2.

It changed our worldview. Saturn, Uranus, Jupiter and Neptune were not the vaguely spherical celestial entities depicted in encyclopedia and school textbooks. They had mountains, craters and geysers of sodium and water. The Voyagers circle space even today.

In the book under review Stephen J Pyne takes us to the early years of the spacecraft. Voyager is a rich mix of history, science and fine writing. Pyne designates the Voyagers as flagships of what he calls the Third Wave of Exploration. The first wave happened in the late 15th and early 16th centuries when explorers from the Iberian Peninsula went searching for land rich in spice and gold.

The second great wave, commencing with expeditions to measure the transits of Venus in 1761 and 1769, had scientific aspirations. Charles Darwin and Alexander von Humboldt were some of its illustrious figures.

 The third age was marked by the technological rivalry of the Cold War. The Voyagers were products of American desire to beat the Soviet Union in space exploration. There was also something fortuitous in the launch of the two spacecraft. The alignment of the planets that allowed the Voyagers to take their initial path comes once every 176 years—the next window will be 2153.

But it would be unfair to say that the Voyagers were mere products of circumstances. In deftly sketched prose Pyne outlines the hopes of the Voyagers’ builders at the Jet Propulsion Laboratory in Pasadena, California, the political forces that aligned to make the mission possible, and the complicated logistics required to keep a spacecraft alive for three decades. Voyager’s launch was cancelled when NASA’s budget began to crash in the post-Apollo letdown in the mid-1970s. 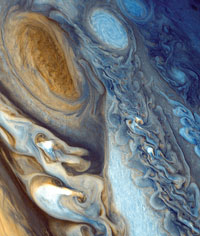 Originally conceived as a single spacecraft, Voyager was resurrected as a pair of spacecraft. Voyager 2 was launched first, on August 20, 1977. Voyager 1, which would beat its twin to Jupiter and Saturn, followed 15 days later.

Once the Voyagers were in space, journalists assembled at the Jet Propulsion Laboratory in Pasadena, where images from the spacecraft were displayed on television monitors in the pressroom at the same time scientists huddled in the next building were receiving them.

Every morning at 11 selected members of the Voyager team would assemble at the pressroom, nervous and self-conscious, unused to discussing science in public, to explain what everyone was seeing. Often they would mumble they had no idea about the images. This reviewer has one grouse. Pyne’s evocative prose is not matched by his book’s visual content.

One longs for the close-ups of Saturn’s rings, the great dark spots of Neptune’s satellites and the three coloured filtered image of the Jupiter.