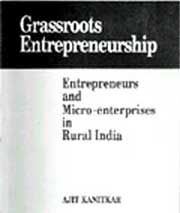 the accelerating growth rate of the rural non-farm sector (nfs) and its rising significance has necessitated the examination of the actors constituting it. Ajit Kanitkar makes a bold attempt at understanding the emergence and sustenance of rural entrepreneurship.

The importance of promoting non-agricultural economic activities, prompted the government to establish the National Bank for Agricultural and Rural Development, a funding agency encouraging rural enterprises. But, many income-generating schemes targetted at the rural poor have failed miserably. According to Kanitkar, for the promotion of the nfs and the entrepreneurs, one must understand the socio-economic background of the entrepreneurs well and study the factors facilitating and hindering their entry into the nfs . It is also important to study the choice of business and their management.

Field studies have revealed that it is more often than not an involuntary decision on the part of the entrepreneurs to enter the nfs. T hey are pushed into being their own masters due to the increasing pressure on land, the need to support large families, dwindling agricultural incomes and the burden of discharging family responsibilities. These were factors common to the backgrounds of 86 entrepreneurs studied. The study also indicates a shift from the occupation pursued by the parents and the family of the entrepreneurs.

Launching a business on their own was typically based on 'unguided apprenticeship', where working and learning depended entirely on the individual. Many entrepreneurs evaluated the appropriateness of a particular opportunity. The factors which influenced the choice of business were the social, political and economic environment of the particular village, its geographical location and proximity to cities, and the area of its influence.

But, the management of these micro-enterprises faces a serious problem of debt recovery. This happens because they offer their customers generous credit at the beginning of the venture. The problem severely erodes the liquidity of these establishments and gives rise to recurrent shortages of working capital. Besides, as most of the businesses are service industries, their success prompts many more to enter the field, leading to greater competition. In extreme situations, the non-fulfilment of promises and the lowering of profit threatens the very existence of the businesses.

Kanitkar aptly suggests that the solution to these problems may lie in 'guided apprenticeship', something that it is extended by institutes like the Industrial Training Institute. He also urges a restructuring of the manner in which financial institutes at the village level operate, as most entrepreneurs face the problem of obtaining credit from them. According to Kanitkar, there should also be consultants/ counsellors to whom the small units could turn to for advice.