Economists who study poverty are broadly of two types.

Those who deal in abstract models, slotting the poor below one poverty line or the other, and those who try to demystify the term “poverty”. Rehman Sobhan belongs to the latter.

The title of his latest book, Challenging the Injustice of Poverty, gives away the Bangladeshi economist’s inclination. He believes people are poor because their access to resources is blocked by elites. The argument might seem simplistic and hackneyed. It is something politicians with varying agendas mouth regularly. But simple solutions are often difficult to implement. The merit of Sobhan’s work is that it explains how to carry out poverty reduction programmes.

He does not share the anti-market thrust of many economists working on poverty issues. Sobhan, instead, believes in “increasing the market value of the marginalised”. The state, he asserts, should create conditions that enable the poor to compete in markets.

Sobhan also advocates state intervention in a few other areas—providing the poor with quality education, healthcare and, where possible, work.

“The fact that the economy functions in an unequal way and people still suffer from hunger makes it necessary for the state to constantly supplement the livelihood of the poor,” he writes. But Sobhan feels that the state education and healthcare amenities mean nothing unless they can compete with those provided by private agencies and enjoyed by privileged communities. 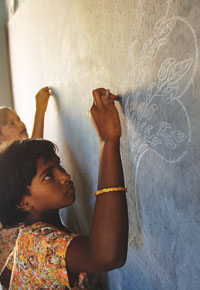 This is a crucial point, as South Asian governments often give up after building few schools and hospitals or after providing salaries for doctors and teachers. So there might be access to primary and secondary education across South Asia, but the quality of education remains poor. A student attending a government-run school does not have the same opportunities as the one going to an elite school.

Sobhan comments that South Asian countries need to learn from each other while implementing antipoverty programmes. He lauds some NGOs and suggests microfinance institutions convert their borrowers into shareholders. The Amul cooperative in Gujarat figures prominently in his work. The cooperative ensures that dairy farmers have access to credit and technology. Milk production is high and processing it adds further value. The final products are sold in urban supermarkets fetching a much higher price than they would in a small Gujarat town.

Sobhan shows how Milk Vita in Bangladesh replicated the Amul experience, though on a smaller scale. Political parties figure less prominently in the economist’s analysis.

The part on land reforms has very little on the measures driven by party agendas— that of the Left parties and the Congress in some parts of India. But that does not take away anything from Sobhan’s work, which should be of interest to academics and policymakers. Others concerned with persistent poverty in South Asia will also find the book interesting.

Shefali Kukreti is in the Indian Administrative Service. The views expressed in this review are hers alone