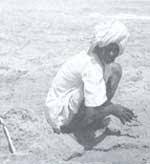 Agriculture, India's primary sector, is vulnerable nature's vagaries, but technological innovations have been playing a bigger role in its development. However, the lack of coordination between researchers and administrators, agricultural extension officials and farmers, even between progressive farmers and other land-tillers often hamper the process.

Extension officials play a special role in disseminating agricultural advancements. They can bridge the scientific and the farming communities. But they are frequently blamed for the poor diffusion of techniques. The common excuses are inadequate trained personnel and a poor communication network. Basically, a strong, committed network is necessary to execute any extension activity. Otherwise, agricultural research will remain restricted to labs.

The first volume discusses the basic concepts and definitions of extension. Volume 2 contains illustrations and field examples of topical interest from developing regions.

Although they look like typical textbooks, the authors enumerate issues based on field experiences. They stress on not undermining the experiences of the local farmers and on the need to learn from the grassroots farmers.

They write that the "formal school system...mostly contributes little to...rural living conditions". Any prepackaged technical inputs explained to farmers will worsen the situation instead of helping them. The solutions of every extension programme -- crop science, soil health, water management, forest plantation or livestock rearing -- should be more season- and region-specific. The solution prescribed for one region and crop may not be suitable for another.

The authors emphasise that effective extension systems would increase production, particularly that of the marginal and small farmers. But large farmers should not be neglected, since they help increase food production and marketable surplus.

In some cases, the extension effort has had a positive impact on both the agricultural and the rural sectors. The training and visit system, sponsored by the World Bank in the late '60s, was successful in states like Tamil Nadu. The Indian Council of Agricultural Research has now asked its scientists to devote considerable time on extension after releasing a particular crop variety or introducing a plant-based pesticide.

The writers suggest various methods for effectively spreading the word. The extension worker- farmer relationship should be reciprocal; preference should be given to target groups like small farmers and women.

Based on various ongoing extension work, the second volume illustrates models: for instance, guidelines to identify target groups like resource-poor small farmers and women, and the methodology of extension talks, are useful. The authors stress that extension talks by the officials should be simple and unambiguously understood by any farmer.