The essays in the volume under review take us to some of the most volatile conflicts over natural resources. We are taken to oilfields in West Asia and Nigeria, parched Gujarat, the Punjab canal colonies that had not yet become the bread basket of undivided India and the palm-oil plantations of Indonesia. We are also taken to hallowed boardrooms where discussions on climate change take place.

Usually such conflicts over nature are viewed under the rubric of political ecology: a forest becomes the locus of contention because its trees represent timber, fodder or fuel. The essays in this volume eschew such a materialistic approach. This is significant. For natural resources have a value that exceeds the concern with immediate material use.For Dalits, traditionally excluded from institutions controlling the villages water economy, a place in the water users association has a symbolic value as significant as the material gains from water.

The great merit of the essays in this volume is they show how multiple identities are played up in conflicts over natural resources. The Adivasi fighting against displacement in the Narmada valley is simultaneously a farmer, a collector of forest produce, a woman, a mother, a consumer of manufactured goods like fertilizers and saris and a voter in state and national elections. As the editor points out in the introduction, such criss-crossing of identities is intrinsic to how people live their daily lives and crucial to shaping collective action. 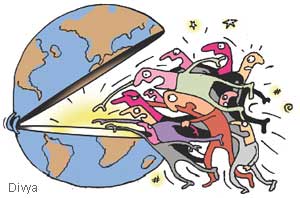 The essays eschew easy binaries of state/community or corporates/community. For example Michael Watts, in his essay on the oil politics of Nigeria, shows how the hanging of the anti-Shell Oil activist Ken Saro-Wiwa represented the summit of mass mobilization of Nigerian ethnic groups by the countrys military government.

Lyla Mehta shows how scarcity, an oft-repeated word in todays environmental discourse, is socially mediated. In her essay on Gujarats Kutch region, Mehta shows scarcity was earlier accepted as part of life in the drought-prone area. It legitimized social differences based on caste and gender, but scarcity has become the focus of state interventions that have exacerbated the earlier differences. Mehta argues construction of mega-dams like the Sardar Sarovar is legitimized through tactics that created the scarcity.

The essays show another false assumption: nature exists outside human experience. The notion of pristine nature has fostered a stream of conservation that decries any human intervention over nature. But it also opens the doors for ideas of development that hold nature at the beck and call of humans. The essays in this volume, in contrast, take a more sophisticated call on nature.

K Nandy is a sociologist in Kolkata