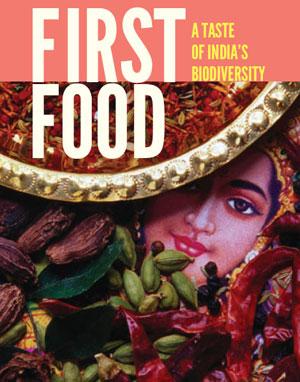 Repasts from the past: There are various kinds of maps in the world. Some are about power and control, staking out territory or resource; their preferred perch is the flattened grid of a monocultural imagination, political, cultural, or environmental. But there are other fluid maps that emerge from the terrains of human experience. These maps trace the ecology of cultures across time and space, with an open mind.
Chitra Padmanabhan

A quick rummage through the contents of our refrigerator reveals how much our eating habits have changed over the last decade. Emerald broccoli florets, butter yellow zucchinis and bitter rocket leaves lie next to pods of country peas, spinach leaves and strings of cluster beans. When pressed for time, it's easy to rustle up pasta with bottled pesto. When cooking a more fancy dinner, Thai curry with jasmine rice, lasagna or tacos are often on the menu. Yet, while we are embracing world foods and making them an integral part of our larders, we are increasingly alienating the more indigenous foods that used to be part of our grandmothers' lives. Bijal Vachharajani

I have to admit that I never thought of eating jute till I came across this book. It indeed opens up closed minds on the narrow definitions of food that have developed over time. Did you, for instance, know that the orange palash flower - whose petals are used to make an organic dye - can lead to a cooling sherbet?

But what I find most interesting is the wide range of greens that the book looks at. Among them is the chaulai - also called amaranth or ramdana. It grows in abundance in the Himalayan region and is also found in Tamil Nadu, Maharashtra, Madhya Pradesh and Gujarat. Amaranth is becoming a bit of a food fad now because of its many health benefits, points out food historian Pushpesh Pant. "It alleviates piles, reduces eczema, provides relief in colic and acts as a diuretic," Pant says. Rahul Verma

What does nostalgia taste like? Does it come on in a rush, or linger gently? In a country so utterly deep-fried in culinary folklore and history, but also avidly sampling a global catalogue of tastes, the answers can be piquant and many. One set comes from First Food, an initiative of the Delhi-based Centre of Science and Environment.

Putting neglected culinary secrets back on the map, the engaging, 168-page book stirs memories of piping hot jute pakoras and other leaf preparations of a Bengal before partition, of the fermented kanji vada evoking images of Holi festivities in northern parts of India, and among other delights, of the simple yet rarely found dishes made using tender bhang leaves Neha Bhatt

First Food: A Taste of India's Biodiversity is an eclectic collection of about 100 recipes extracted from India's immensely diverse but fading culinary memories by the Delhi-based advocacy, Centre for Science and Environment (CSE). The beauty of this country is that it never ceases to surprise you, and this book, based on stories from CSE's magazine, Down to Earth, is a vehicle of many revelations.

I did not know that there exists in Maharashtra's Melghat region the mahua bhakar, a hand-leavened roti made from dry mahua flower and sorghum flour. Aparna Pallavi, one of the contributing writers, narrates her journey from urban Bengal to rural Melghat and how her mother-in-law wasn't initially enthused by her exploration of what are regarded as inferior, tribal foods. Later, Pallavi's mother-in-law joins her in scouting lush roadsides for wild vegetables. I have never heard of tarota, kundar and latari, and the book makes no attempt to explain them. Samar Halarnkar

The list of ingredients in the book, First Food: A Taste of India's Biodiversity (CSE, Rs 950), represents India's amazing food sources-from the makhana seeds (Euryale ferox) of Bihar to mahua flowers (Madhuca indica), from the gahat dal (Dolichos biflorus) of Garhwal and Kumaon to jute leaves (Corchorus capsualris). Non-city dwellers will identify with many of the simple, hearty dishes listed in the book. Metro eaters will begin to see things in a new light.

They can see how marijuana, for instance, is not simply a well-regarded hallucinogenic, but also makes for excellent pakodas. Neem is not only the rustic's own Colgate, but is also a loved addition to aubergine in Bengali homes. And perilla (bhangjeera in Uttarakhand, silam in Darjeeling and Sikkim) is not just the dainty leaves served in salads in up-market Japanese restaurants, but the stuff of excellent tea, chutney and pickles. And did you know that the puja-time alternative singhara (water chestnut) makes savoury puris or that the buds of the kachnar plant (Bauhinia variegata) can be turned into a tasty dish? Joel Rai

A cookbook celebrating India's biodiversity:This is an unusual cookbook. The writers are neither chefs, not celebrities; they include economists, civil society leaders, environmentalists, professors, writers and even a noted ayurvedic vaidya. Sourish Bhattacharyya

Millets find their mojo: Korra, samma, navara, tarota, kundar, buransh, moringa, bhatt, gahat, karanda - the names sound exotic and distant but fact is that till not very long ago this was the food that was staple on our thalis (bell peppers, zucchini and shiitake were things that appeared only in glossy, imported cookbooks) Malini Nair

Swigs of bliss: Let me begin with a confession. I belong to a family forever paranoid of catching cold, the occasional stomach ache, loss of appetite for food, indigestion and what not. So those pre-geyser days, as soon as a few drops of monsoon rain would fall on our tin roof, a tub of water would go up on log fire to have a warm foot bath, in anticipation that we kids would come home drenched and might catch a cold. Sangeeta Barooah Pisharoty

I attended the book launch that happened amid much fanfare, a very welcome step as more and more people need to appreciate real food from our land. The food that grows in our jungles, in the water bodies by the villages, in the dry arid areas where nothing else can grow and in our own neighborhood, be it in the form of roadside trees like mulberry, jamun , tamarind or Bauhinia (kachnar) or the common garden weeds alike amaranth, wild purslane, oxalis, punarnava (Boerhavia diffusa) or bhumiamlaki (Phyllanthus niruri), has much value not only in nutritional terms, but supplementing and conserving biodiversity of our remaining breathing land.