Get on the ray

The book under review comes in the wake of the launch of the National Solar Mission, which intends to use grid-connected solar power to meet its ambitious target. Till recently, solar energy was considered a roof top option both for power and heat. Integration of solar power into the national grid will require new protocols.

The book’s contributors are aware of this requirement. A Solar Future for India covers the solar options of the country in terms of requirements not only of technology but also materials, finance, policy and regulatory mechanisms.

The first few essays position solar energy in the global energy system. D Yogi Goswami’s paper, for example, is a succinct description of the economics of solar power. Goswami says Europe and the US’ lead in solar energy could be challenged in the next decade with China, Japan and India taking on ambitious solar energy programmes. 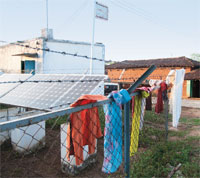 The book’s second section has essays that deal with constraints on the availability of silicon and silver for large-scale solar photo voltaic programme. India does not have a project to manufacture its own silicon and that could be a roadblock to its solar programme.

The book also notes that a large amount of energy is required to produce material for solar energy equipment. It advocates recycling electronic grade silicon waste. The last part of the book discusses implementation strategies for achieving the goals of the solar mission. Essays discuss options such as the smart grid.

A few typos and mathematical design equations in chapters on water heating and distillation mar the book’s readability. Nevertheless, it is the first book of its kind in India, detailing the importance of solar option and outlining the steps to achieve it. A must read for executives and planners dealing with energy issues.