Global warming's point of no return

This is an extremely unsettling work. James Lovelock, maverick British scientist, argues here that global warming has passed the point of no return.

Lovelock is renowned for the development, with biologist Lynn Margulis, in the early 1970s of the idea of "the dynamical physiological system that has kept our planet fit for life for more than three billion years". Following a conversation with the novelist William Golding, Lovelock named this self-regulating system after the Greek earth goddess, Gaia. According to the Gaia theory, life on our planet unconsciously acts in concert to regulate Earth's climate.

The theory elicited a firestorm of criticism, much of it from Darwinians. A lot of it was because of misinformation: many thought Lovelock had described the earth as a living organism. 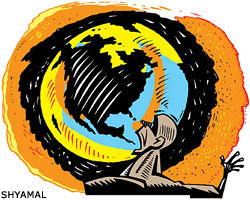 A lot of the cynicism was confirmed when ecological romantics of the 1980s adopted Gaia as a kind of faith.

Lovelock had to clarify matters. A better analogy for Gaia is that of a giant self-regulating valve, like those used by engineers to control machine outputs. Used this way, the idea went on to help scientists sharpen their predictive powers, particularly over climate change.

But the theory was not all about metaphorics. Proving that the atmosphere and oceans were the critical components of a self-regulating system was an exercise in cause-and-effect evidence gathering.

Identifying the chemical transactions that regulated the planet's climate became Lovelock's calling. Today the Gaia theory is mainstream--though a lot of scientists prefer to call the theory the earth system.

In The Revenge of Gaia, Lovelock applies the theory to climate change. Using the latest scientific findings, he concludes that global heating--as he describes it--is set to take its course. "We are the cause of it, and nothing so severe has happened since the start of the Eocene, 55 million years ago, when the change was larger than that between the ice age and the 19th century."

In advancing this theory, far gloomier than any yet made by a scientist of comparable international standing, Lovelock accepts he is going out on a limb. But he feels his own analysis leaves him no choice.

He believes that it is the self-regulating mechanism of Gaia itself will ensure that the warming cannot be mastered. This is because the system contains myriad feedback mechanisms, which in the past have acted in concert to keep the Earth much cooler than it otherwise would be.

Now, however, they will come together to increase the warming being caused by human activities such as transport and industry through huge emissions of greenhouse gases. So Lovelock calls on governments to begin large-scale preparations for surviving what he now sees as inevitable, in his own phrase, "a hell of a climate".

Lovelock's arguments are not likely to be palatable to many environmentalists--a lot of them in fact regard him as an icon. He argues that it is nave to believe that sustainable technologies and alternative sources of energy can somehow smoothly replace the looming negative consequences of global warming.

He sees these as akin to false assurances of politicians, designed to make people living in the luxury and comfort of the First World, making them live in false security when they should be terrified instead.

The scientist believes we must retreat from our profligate energy usage, going so far as to use an analogy from history: Napoleon's Russia campaign, which also might have benefited from a planned retreat.

But Lovelock is also mindful that the billions of people cannot go back to pre-industrial days. The scientist's advocacy of nuclear energy as a tentative solution is also not likely to be palatable to environmentalists. He is careful to qualify his support with many caveats. Fusion, which is not currently a viable technology, is preferable to fission, which is viable, but carries a greater waste problem.

The Revenge of Gaia is a slim volume that can be easily read in one sitting, but it raises many significant questions and offers a perspective on planetary health that is not likely to be found elsewhere. Though the book has been occasioned by the scientist's pessimism that we may have already passed a planetary tipping point regarding global heating, many of us will do well see the folly of our profligate ways. But will there be any corrective action?.