Issues in privatisation and commercialisation of water

In 2003, Manthan Adhyayan Kendra came out with a booklet that dealt with basic issues and trends in privatisation of the water sector. In the four years since the booklet came out, privatisation drives have intensified in many parts of the world with governments, funders and companies changing strategies. Manthan has expanded its slim publication of 2003 to take note of some of these changes: there are examples from Latin America and Africa where private companies have come second best in water wars, and there are important caveats and lessons for India as the country goes full-steam in privatising water.All this with a rigour characteristic of other water-related studies conducted by Bhadwani, the Madhya Pradesh-based ngo.

Changes in approach by funding agencies and companies hold much of the authors' attention. Public-private partnerships (ppp) is among the approaches in vogue. On the face of it, the approach looks democratic, but there is much beyond surface appearances, the book shows. Actually, ppp means private companies providing water to industries or residential areas, where people can pay, leaving the poor at the mercy of local government. The authors feel this has virtually sounded the death knell of the cross-subsidy system--in which water agencies collect from the rich to subsidise the poor. Social responsibility is the casualty.
Privatisation almost always comes with increased water tariffs: in Manila and Guinea, water rates shot up by 500 per cent and 750 per cent respectively. The companies justify such hikes saying it was necessary to recover costs. But a simple audit of some private firms shows this argument doesn't hold water. The authors cite Delhi's proposed privatisation plan in which zonal managers would get Rs 11 lakh a month as pay.

It's examples such as these that make this volume a compelling read. Another that deserves mention is India's first privatisation project: the Sheonath scheme in Chhattisgarh, operated by Radial Water Limited. The company continues to operate the utility in face of stiff resistance from local people. For good reason: Radial Water is paid for supplying 4 million litres of water daily (mld), while the actual supply is 1 mld. The anomaly lies in the contract between the state and Radial Water: it's based on a "pay or take" basis, which means the government has to pay Radial Water even when large quantities of water it 'supplies' go unutilised.
The authors also discuss two privatisation tactics adopted by the World Bank and the Asian Development Bank. The first entails a company building and operating a water treatment plant or other utilities, and then transferring them to the government after a long lease period.

The second privatisation tactic discussed in this book often goes on under the garb of a fashionable term: water sector reform. In reality, this means that loans by adb and other lenders are contingent upon participation of private companies and private consultants. The book has an interesting example: Delhi's water reforms study was conducted by the multinational consultancy firm PriceWatercoopers at the World Bank's insistence.

Often, consultants rake in more than what is allocated to a critical sector of a project. 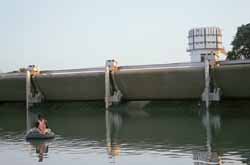 
The authors also take on the common argument that privatisation will bring in investment. They cite the example of the Tirupur water supply project in Tamil Nadu. India's biggest private supply project has a paltry 13 per cent private investment to show for all its hype.

Privatisation is not just about skewed economics. In some places, accessing water supply is deliberately made cumbrous for the low-income. The book talks of one device designed for this purpose: tricklers. In South Africa, these coin- like devices with holes are fitted on to water connections, reducing the supply. So, it takes people hours to fill a bucket.

The authors feel that opposing privatisation does not imply accepting public systems which are bureaucratic, inefficient and unable to deliver results. There is, indeed, an urgent need for revamping and transforming public systems. These need to promote democratic, participatory management options rather than blind commercialisation and commodification.