In the past thirty years, ngo participation in international environmental negotiations has increased. Peter Willetts, who has written extensively on ngos, sees the 1972 un environment conference in Stockholm as watershed in this respect.&NBSP;He says the event marked the beginning of a ''slow yet steady liberalization of the ngo system''.

The editors argue that ngos influence international negotiations in two ways one, through direct participation in negotiations, and two, by influencing the behaviour of other participants.

The volume is significant in showing both high points and limits of ngo diplomacy. Michele Betsill's essay in this volume, for example, shows that the influence of ngos on the Kyoto Protocol negotiations on global climate change have been fairly moderate. David Humphreys, in contrast, highlights an area where ngo participation has been more effective. Humphreys shows how environmental ngos have succeeded in reframing the issue of forest conservation from a purely economic issue to an ecological and human rights one.

Other essays place ngo participation in a historical context. Steinar Andresen and Tora Skodvin, for example, argue that the increased influence of environmental ngos on International Whaling Commission negotiations coincided with a decrease in the influence of the scientific community .

This book will find quite a few takers, particularly because it does not repeat mistakes made by earlier works on ngos. It does not, for example, see ngos as an undifferentiated lot. Stanley Burgiel's essay, a high point of this volume, shows how industry roped in ngos do its bidding at negotiations on the Cartegna Protocol on Biosafety. 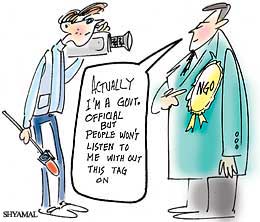 But much of this volume's merits also contribute to its shortcomings. We are tantalized by the historical context of ngo diplomacy and then left disappointed with the sketchy treatment accorded to it. There has been little attempt to describe conditions under which ngos make a difference in either the decision-making process or the outcome of international negotiations.

The book is also weak in delineating the politics of ngo participation. Of course there is much on the difference between environmental ngos and those that work at the behest of the industry. But there is nothing on the politics of international environmental ngos. Are we to believe that Greenpeace and Friends of the Earth are part of the same flock? Or is their any difference in their politics? The book makes us long for more in other areas as well. For example, we could have done with some information on the differences between ngos in the North and those in the South.

There is also not much on the different styles of ngo activism. We know that some ngos lobby, others agitate, some others use knowledge-based activism. But do differences in functioning also impact ngo influence? Also how much of an influence have ngos exerted on global environmental negotiations. We get no answers from this volume.

The volume does raise a lot of issues. But the simplistic manner with most issues have been treated is quite likely to leave many disappointed.