When media reports suggested water as among the reasons for the political conflict over Telangana in Andhra Pradesh, many readers were not surprised. Analysts see water as a critical cause for almost every other political conflict. Competition for Nile water is acute between Egypt and Ethiopia. Fierce disputes also divide Turkey and its southern neighbours in the Jordan basin. India has water disputes with Bangladesh and Pakistan. And in north Africa, West Asia and even the US, aquifers whose water may have lain undisturbed for 10,000 to 75,000 years are now being recklessly drained. Everywhere it is the poor who suffer the most. It is not surprising that 21st century conflicts will be fought over water as they were for oil in the 20th. A UN report warns that extreme droughts, floods, melting glaciers and other water cycle-related effects of global warming will result in 150 million refugees within a decade.

In Water The Epic Struggle for Wealth, Power, and Civilization, veteran US journalist Steven Solomon connects freshwater’s past and present to paint a future, and potentially very unstable picture of human civilisation. Solomon’s analysis is grounded in history. Roman success came both in mastering ship building to control the Mediterranean’s western sea lanes, and in devising a series of massive aqueducts and water systems for its urban population. In China, the 2,500 km-long Grand Canal linking the great Yangtze and Yellow rivers provided a vital transport line between the country’s north and south. Portugal, Spain, Holland and England’s mastery of the seas led them to extend empires throughout the world. The completion of the Panama Canal in 1914 dramatically opened global trade opportunities for the US. 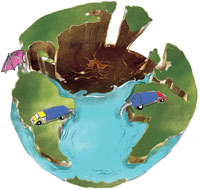 In almost Malthusian manner, Solomon shows each advance in using water more productively and making it available to more people brings with it explosive increases in population and water consumption. These spark economic growth and a generally higher standard of living but make societies vulnerable to “water shocks” like floods. Societies find that their ability to exploit water no longer matches the demand they have created. Irrigated farmland gets salinised, dam silts up and the supply of drinkable water is no longer sufficient. From the Indus Valley civilisation of the second millennium BC to the Mayans 2,000 years later, societies that failed to meet these water challenges stagnated and collapsed.

Solomon believes water crises are the hallmark of affluent societies. Improved lifestyles are major drains on water supplies. The world’s growing middle class is consuming more beef and more dairy goods, products that require much more water than other foods: it can take up to 75 times as much water to produce one pound of beef as it does to produce one pound of wheat. Water’s fortunes have also been bound up with energy matters since the invention of the watermill. Conventional energy generation requires water for cooling.

At many places Solomon agrees with those arguing that water will shape future political configurations in the manner oil did till about a decade ago. But he is alive to a critical difference. While a society’s transition from oil may be painful, water is irreplaceable. Yet water costs far less than oil. “In some cases, where there are large political subsidies, largely in agriculture, it does not [cost very much],” says Solomon. But he does not have an issue with those arguing that everyone has a basic right to water.

What should we do? Solomon does not have a one-size-fits-all remedy. “Each society’s hydrological reality and challenges, like its political, economic and social conditions, are unique. Some societies have to cope with monsoonal seasonality, others with perennial rainfall, and some with almost none at all,” he writes. China and India, he thinks, are water-limited, and cannot long sustain their present growth trajectories. Their agricultural practices are especially vulnerable, being heavily dependent on the mining of deep aquifers. And their prospects will become even more dubious should climate change continue to shrink the Himalayan glaciers.

Sita Vaidya is at the department of anthropology in Delhi University