Fish breeders regard this as a feat. But as Paul Greenberg observes in this book under review, these salmon have been reared at the cost of the nine billion pounds of wild fish that have been caught and ground into pellets to feed them. The American journalist structures his book around four fish that he calls “archetypes” or “archives” of fish as food: salmon, sea bass, cod and tuna. But he also considers many more, like carp, hoki, pollock, tra, tilapia, swordfish and whale.

Greenberg believes that, “With wild fish we have chosen, time after time, to ignore the fundamental limits the laws of nature place on eco-systems.”

In the US, thanks to ruthless overfishing of the waters off Greenland by the Scandinavians in the 1960s, there is no longer a popular memory of wild Atlantic salmon as food.

Greenberg is a fish lover and the book begins with descriptions of his fishing forays as a child. 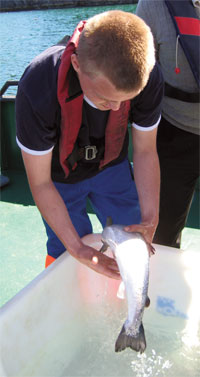 As Greenberg follows his four species, and our pursuit of them, farther and farther out into the ocean, he posits the sense of privilege we should feel in consuming wild fish. But the account does not become a lament. Greenberg retains a primeval thrill of the hunt, but is also piqued by the ethical issues his hobby raises, especially when he fishes for threatened species.

Greenberg pushes the discussion of fish beyond the opposition between good-wild-fresh or bad-artificial-farmed. He argues we need both wild and farmed fish. But inherent conflicts of interest abound between scientists, fishers, governments, regulatory agencies, international boundaries and treaties, lobbyists, multi-national corporations, and consumers.

So much of Greenberg’s attention is focused on alternatives for aquaculture: barramundi for cod, Vietnamese tra and African tilapia for bass, Hawaiian kahala for tuna.

He argues that careful and responsible farming of suitable species is the only way to meet global demand for fish and that this could be supplemented by controlled, small-scale exploitation of wild species, including cod and Pacific salmon.

Abhiroop Mukherjee teaches economics in Kolkata and loves his fish