Book>> The politics of climate change and the global crisis: mortgaging our future •by Praful Bidwai • Orient Blackswan • Rs 750

Ever since climate change and its probable effects on earth became common knowledge, much has been written about the topic. The world has been riveted by various climate change negotiations that have taken place and at times frustrated at their slow pace. The very process of proposing (let alone implementing) a solution to this grave problem is so convoluted that most of us would be forgiven for posing questions that perhaps only the au courant climate change experts can answer. For instance, how can you and I, who have a vital stake in a global solution to the climate crisis, become actors in the effort to resolve it? In what manner can people on the ground, particularly the underprivileged, participate in decision making on climate issues? How might the disadvantaged peoples of the South articulate and express their concerns given the asymmetries of power between developed and developing nations? Praful Bidwai’s The Politics of Climate Change and the Global Crisis: Mortgaging Our Future answers these questions eloquently.

One of South Asia’s most widely published columnists, Bidwai is a social science researcher and activist on human rights, environment, global justice and peace. Clearly, a work of love, the book has been put together very painstakingly. The results are obvious not just from the selection of topics as chapters, but also the collection of notes at the end of each chapter, pointing readers to explore, educate and seek answers of their own accord. The book is a marvellous example of intelligent critiquing but it does not stop there; it goes on to suggest possible solutions to dilemmas in the climate change arena. 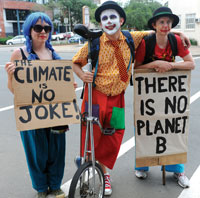 Aside from the history of climate change negotiations and where they stand today (a must for all students of climate change), Bidwai tackles India’s role in the crisis, how it should respond and why its sabre rattling (read “growth at all costs”) has been to the country’s own detriment, in a very frank and transparent manner. While Bidwai accepts that India has a powerful case on the right to development because a majority of its people lack the bare necessities of survival, he believes that the government is wrong in insisting that the world must respect and accept the economic model India is pursuing. After all, India’s myopic stance on GDP growth at all costs has not helped the poor thus far, and is not likely to help them in the future.

Low-carbon path is the only way to go, and Bidwai excels at describing the many practical and proven options available to the government in pursuing this path, be it reducing energy use in agriculture, regenerating abandoned rocky land by organisation Seeds to Fruit in Tamil Nadu, sustainable water use through the system of rice intensification, or junking the ubiquitous energy-guzzling urban bane called the air-conditioner for passive (read “free”) cooling methods. As Bidwai puts it “at the core of this agenda is the imperative to raise the standard of living of the poor, and reach modern energy services to them”.

Particularly insightful is Bidwai’s scathing critique of the Indian National Action Plan on Climate Change, LEED (Leadership in Energy and Environmental Design) rating system of the US Green Building Council, Carbon Capture and Storage, and the most revered (or reviled, depending which side you are on) invention in the field thus far—the Clean Development Mechanism or CDM.

The book would not be complete without a discussion of nuclear power in general, what it means to India, and why it is a false promise for nations aspiring to a low-carbon economy. Bidwai includes an entire chapter on the global revolution wrought by renewable energy technologies such as wind and solar power. In a nutshell, the book is highly recommended reading for politicians, citizens, entrepreneurs, researchers and students—in that order.

Mahazareen Dastur is an environmental researcher and writer in Mumbai. She blogs at mahazareendastur.blogspot.in