Imagine an author who does not expect payment for his work, who circulates his writing for free and craves for a large readership. Sounds like a blogger. But in Tom Standage’s Writing on the wall, this description is actually that of Cicero. The 10th century BC Roman philosopher was one of the most prolific writers of his time. 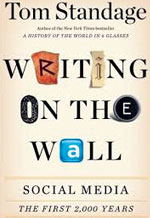 But he was certainly not alone in believing that information should be shared—at least among peers and equals. Cicero, like other upper-class Romans got his news on papyrus rolls that were copied, annotated and passed from person to person. Speeches, books, even personal letters were read aloud by slaves and sent to friends and acquaintances.

According to Standage, such dissemination made early media social in much the same way as today’s social media. If we go by Standage’s account, the modern individual reading the newspaper in solitude—or perhaps with family—is an aberration in history. The production, dissemination and consumption of news was a social act through much of our history. People derived information as much from rumours and gossips as from eyewitness accounts and informed critiques—indeed eyewitness accounts could even be full of rumour.

Standage’s argument about the longstanding social nature of media derives primarily from European history. Taking the well-accepted view that diffusion of information decreased in the middle ages, Standage argues that this holiday ended in 16th century AD when the discovery of the printing press made people’s attitude towards information remarkably akin to that of the early Romans. Social sharing could produce electrifying effect: The 95 Theses of the 16th century Christian reformer Martin Luther posted on his church door in Wittenberg, printed and passed from hand to hand, spread rapidly across Germany and within a month were known across Europe. Two-and-a-half centuries later, Thomas Paine’s inflammatory anti-British pamphlet “Common Sense” had a similar effect in American colonies. People read it aloud in taverns and coffeehouses; they debated anonymously in newspapers. 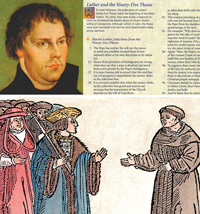 When the radio was discovered, young hobbyists treated the new medium as the occasion for freewheeling conversation. But very soon they were silenced by commercial forces and complaints of antisocial behavior. They were charged that their chatter interfered with operations to rescue the Titanic. The limited capacity of the airwaves and commercial interests forced radio and then television into a pattern of centralised, one-way broadcasting. In the US, these broadcasts would be used to sell ads; in Britain, through the BBC, to elevate the public’s taste; in Nazi Germany, to indoctrinate people.

Standage believes that the production and distribution of news underwent change once it became a commercial product. He sees Benjamin Day’s newspaper New York Sun as an important departure. In 1833, the 23-year-old Day realised that he could make money by producing news. Day’s scheme could work only if the paper attracted a lot of advertising, and advertisers would come only if they could be guaranteed a big readership. So he hired reporters—a relatively novel idea at the time—who wrote crime reports and fantastical stories about creatures on the moon. Readers came, and with them ads for everything from lotteries to abortionists to patent medicines. Success brought imitators. Once a quasi-open platform for discussion and debate, the press became an outlet for ads and reporting. Readers were no longer a community and news was no longer produced by the community.

Standage argues that the Internet has destablised the hold of centralised information dissemination. Facebook, Twitter, Youtube and blogging are modern day version of ancient modes of communication. This is a compelling argument. But Standage would have done well to just describe similarities. For one, literacy in the Internet age is far more than that during the Classical Age. Two, let’s not forget that people today do not consume information only from the Internet. They read newspapers, magazines and books—at least many still do. What does that mean for today’s information regime. Standage’s otherwise insightful account elides analysis on this.

Rishabh Basu is a social media professional in Hyderabad