There are very few decent novels or movies about climate change. Perhaps it is the very urgency of the topic that comes in the way of art. The urgency drives any attempt to depict the subject toward the overblown-disaster-movie approach of The Day After Tomorrow, or the post-apocalyptic moralizing of Age of Stupid.

Scientists, weather forecasters, physicists, statisticians, geologists, dendrochronologists and chemists— and some amateur bloggers— hold sway on subjects related to climate change. English language novelists, by and large, are nowhere to be seen, not even Margaret Atwood who has published critically acclaimed fiction on other environmental themes. The most influential writer to address the topic of global warming is the late Michael Crichton, whose novel State of Fear represents a widely read critique of climate change orthodoxy.

Into this breach steps in Ian McEwan with Solar. Told in three chunks, spaced at intervals between 2000 and 2009, Solar is the story of a Nobel prize-winning physicist on a slow slide to disaster.

Michael Beard made his name in quantum physics by regurgitating Einstein for his hypothesis, the Beard-Einstein Conflation. But he has no other achievement of note. His fifth marriage on the rocks, the scientist has no compunction in pilfering from his wife’s lover. He sticks his foot in his mouth by giving a speech about the genetic reasons why men are superior at science to wom en. 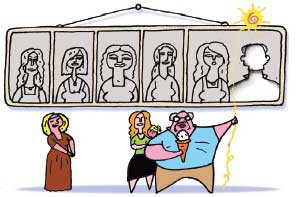 The humour is sharp-edged: a fine satirical blade held tightly against the throat of a world procrastinating on its fears of climate change. Beard’s grotesque over-consumption is a blatant metaphor for human behaviour and its impact on the planet. But McEwan rarely wags fingers. Solar is a character study at its heart, a startling account of the movements—both literal and metaphorical—of a physically and morally unpleasant man fate has placed in a position of power.

It seems McEwan has researched a lot to bring credibility to Beard’s schemes to tap solar energy through artificial photosynthesis. Quantum field theory is made elegantly accessible. But the writer also lampoons scientific research and exposes the pretensions of the celebrities- for-a-cause movement. Solar is a riveting read.

Robi Chowdhury is a playwright