What do we look like when 'we' are 'they'? What does India of prosperity appear to India of destitution? Aravind Adiga turns the tables, shifts the focus, and the progressive, prospering society is viewed from its underbelly. It is an unflattering reflection indeed--in a driver's rear-view mirror. And sympathies are reserved for none. The protagonist is a faithful servant-turned-remorseless murderer--almost a mutant, a White Tiger. He spits at God's creation, sees his fellow strugglers as human spiders and slaps his nephew who looks up to him. Over his consciousness looms large a dark old fort, beckoning him to rise above the life of servitude.

It's Aravind's achievement as a writer--this is his first novel--that this character, Balram driver, is still engrossing, almost endearing.But the trickiest part he manages fairly well is narrating Balram's transition from a desperate, nervous-like-a-rat simpleton eager to serve his masters to a hardened wheeler-dealer who turns his back on his family.

Balram, the son of a rickshaw-puller living under a pseudonym in Bangalore, takes upon himself to expose the lie behind "moral and saintly" India and teach the Chinese premier a thing or two about entrepreneurship before his visit to Bangalore. This he does by narrating his own story in his irreverent and cocky style over seven letters dictated over seven nights. As the story moves from the countryside of Gaya to the hustle of Delhi, it exposes the spectacular failures of India, an aspiring superpower.

Oh yes, there's a hint of Orwell too, with a twist--the driver's brief soliloquies on the System, that unlike Orwell's works from within, stamping out any revolutionary spark. 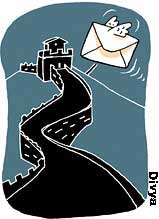 By choosing to tell the story through a "half-baked" school dropout, Aravind refuses to indulge his readers with lyricism. He is out to expose the tawdry realities of liberalizing India and he'd rather do it in a complementing inelegant language--"The exact words of the poem [by Iqbal] I don't remember, but it goes something like this. God says I am powerful. I am huge. Become my servant again. Devil says Ha!". This only makes The White Tiger a brisk read and gives it a rustic tang.

Aravind is not telling a story to merely amuse the reader; he is making a studied comment on India's growing schizoid character, carefully guarding against atmospheric details getting in the way. The White Tiger is all about what we avert our gaze from, shut our minds to. And yet the result is not a boring treatise on class struggle, but a brilliantly crafted page-turner. Aravind knows how to unsettle his readers (readers of Indian fiction in English are likely to be from the middle class). He knows how to make them pause and think.