Book>> The wave: in pursuit of the rogues, freaks and giants of the ocean • by Susan Casey, Doubleday • US $27

In 2000, the British research ship Discovery was caught in a fearsome storm.

As the battered vessel struggled into the dock, scientists discovered that the ship’s research devices were working. The data confirmed waves more than 60 feet high. Scientists had earlier scoffed at seafarers’ stories about rogue waves: their models could not confirm waves higher than 60 feet.

Discovery’s reports, then the tsunami and the knowledge that waves are critical to understand climate change combined to make a scarcely researched subject hip.

Funding became available. In The Wave: In Pursuit of the Rogues, Freaks, and Giants of the Ocean, American journalist Susan Casey writes, “Given that 60 per cent of the world’s population lives within 30 miles of a coastline, wave science is suddenly vital science, and the experts are keenly aware that there are levees, oil rigs, shorelines, ships and millions of lives at stake.” 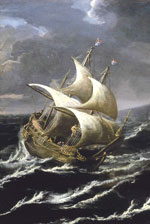 Researchers still struggle to figure out how various unrecognised influences unite to create such a powerful force. Casey recognises that waves have been notoriously difficult to predict. But she pushes scientists to answer the big question: will global warming lead to stormier oceans? They answer with hesitation— because the data is not available to confirm a long-term trend—yes. One scientist cheerfully tells her: “We’re gonna get smacked.”

The book is not a dry examination of weather phenomenon. Interspersed with images of desolation are descriptions of the magic and beauty of waves. We travel with monster waves as they “race toward an uncharted finish line, as uncountable as the stars in the sky.” Casey also writes about her conversations with iconic surfer, Laird Hamilton, who explains, “Every wave’s different on the same day.”

Mukesh Parikh is a science communicator in New York