John Maynard Keynes, the British economist, once described Issac Newton and physicists of his time as “not the first of the scientists, but the last of the sorcerers”. The British economist, rather uncharacteristically, did not substantiate. But in The Clockwork Universe, Isaac Newton, the Royal Society and the Birth of Modern Science, American science writer Edward Dolnick demonstrates the veracity of Keynes’ remark.

He writes that in 17th century the line between science and alchemy was thin, and the scientific and religious worldviews often complemented each other.

Many 17th century scientists derived their conviction of the universe being an orderly place from their religious beliefs. Newton’s “clockwork universe theory” compared the universe to a mechanical clock wound up by God and ticking along, as a perfect machine, with its gears governed by the laws of physics. When others took it to suggest that once the universal clockwork was completely wound there would be no further need for divine intervention to keep the planets in their orbits, the great scientist was dismayed.

As Dolnick writes, “Newton wanted to portray God as a participant in the world, not a spectator. But he built a universe that had no place within it for God.” 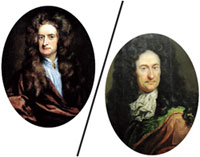 Newton divided his time between pursuits that today we would recognise as science and much more arcane and older disciplines such as alchemy and an obsessive search for numerological codes in the Bible. The nascent Royal Society, which Newton headed, was experimenting on powdered unicorn horn and magical remedies alongside the first serious research with microscopes and vacuum pumps—as much for entertainment as for the advancement of science.

Dolnick’s book teems with eccentric characters. Newton appears as the archetypal absent-minded, sometimes self-absorbed scientist. In 1665, while the great plague was ravaging London, Newton moved to his mother’s farm in the city’s outskirts and thought about the problem of motion.

The math of the time could deal with a changeless, ideal world but not with motion. Two men found the solution almost simultaneously: Newton and his Prussian rival, Gottfried Leibniz. Both scientists invented the laws of motion completely on their own.

Holed up in his mother’s farm to escape the plague, Newton kept the discovery to himself. Leibniz discovered the laws of motion nearly a decade later—and then, bizarrely, he too kept the knowledge to himself for several years. Eventually, another Royal Society member Edmund Halley persuaded Newton to publish his theories of gravity and its mathematical underpinnings.

Dolnick effectively paints the characters of the two great antagonists, as well as the men around them, the politics and personalities and the atmosphere in which they worked.