Book>> The quantum universe, everything that can happen can happen •Brian Cox and Jeff Forshaw • Allen Lane • Rs 699

Brian Cox is a veritable rockstar among physicists. A keyboard virtuoso, he was a part of the now disbanded rock group, D: ream, whose music regularly featured in the UK’s hit charts in the 1990s. His current star status, however, derives from his vocation as a physicist. Cox is well-known as the presenter of two BBC TV series on physics that have attracted millions of viewers.

The Quantum Universe, Everything That Can Happen Can Happen, his new book with long standing collaborator Jeff Forshaw breaks an unwritten rule of popular physics-writing established over two decades ago by Stephen Hawking in the bestseller, A Brief History of Time. Hawkings eschewed equations. In contrast, Cox and Forshaw lavish their book with equations.

Their’s is a difficult predicament. Quantum mechanics is an impenetrably dense subject. Experiments yield bizarre results that can be explained only by embracing the math that describe them. Cox and Forshaw say they have included the math “mainly because it allows us to explain why things are the way they are. Without it, we should have to resort to the physicist-guru mentality whereby we pluck profundities out of thin air, and neither author would be comfortable with guru status”. 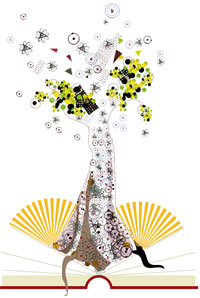 The use of equations does not make the book dry; it does appear dense at places though. But the dense patches are followed by witty descriptions of quantum physics’ nuances. Quantum Universe’s great merit, however, lies in the manner in which the authors build on US physicist Richard Feynman’s technique of popularising quantum mechanics. Feynman described how quantum theory accounts for many properties of the world by using clock hands, all without using a single Greek symbol. But in the maverick US scientist’s hands, the clocks were never more than an analogy. Cox and Forshaw, in contrast, use the tiny clocks to calculate real results.

Still, the book is at its best when Cox and Forshaw leave matters to their prose. Sample this long rather paragraph for example: “Consider the world around you. You are holding a book made of paper, the crushed pulp of a tree. Trees are machines able to take a supply of atoms and molecules, break them down and rearrange them into cooperating colonies composed of many trillions of individual parts. They do this using a molecule known as chlorophyll, composed of over a hundred carbon, hydrogen and oxygen atoms twisted into an intricate shape with a few magnesium and nitrogen atoms bolted on.

This assembly of particles is able to capture the light that has travelled the 93 million miles from our star, a nuclear furnace the volume of a million earths, and transfer that energy into the heart of cells, where it is used to build molecules from CO2 and water, giving out life-enriching oxygen as it does so. It’s these molecular chains that form the superstructure of trees and all living things, the paper in your book. You can read the book and understand the words because you have eyes that can convert the scattered light from the pages into electrical impulses that are interpreted by your brain, the most complex structure we know of in the Universe.

We have discovered that all these things are nothing more than assemblies of atoms, and that the wide variety of atoms are constructed using only three particles: electrons, protons and neutrons. We have also discovered that the protons and neutrons are themselves made up of smaller entities called quarks, and that it is where things stop, as far as we can tell today. Underpinning all of this is quantum theory.”

Understanding the universe is not easy. The book will go some way in making it more lucid.

Kartik Chandrashekar is a physicist based in Melbourne, Australia