Our tigers, their tigers

Book>> Forest Of Tigers: People Politics And Environment In The Sundarbans • By Annu Jalais • Routledge • Rs 395

For layman and conservationists alike the Sundarbans conjures the image of the graceful Bengal tiger and the mysteries surrounding its man-eating ways. It is but rarely, one gets to know of the people of the Sundarban islands who share habitat with the big cats.

This is why Annu Jalais’ book is significant. She delves into the lives and livelihoods of the islanders who work as forest fishers, honey and crab collectors. A work in cultural anthropology, Forest of Tigers: People Politics and Environment in the Sundarbans, details the myths and beliefs, shaped by more than two centuries of living in a harsh terrain under the constant threat of tigers, snakes and natural disasters. Jalais puts forth a political narrative that differentiates between the “local” tiger as opposed to the global cosmopolitan tiger. In the local mythology, the reigning deity of the forest is Bonbibi, sent by Allah to restore peace between humans and animals. The sage-turned-tiger, Dokhhin Rai, seeks her protection as does Dukhe, a village boy abandoned by his family inside the jungle, symbolic of islanders depending on the forests for their survival. In Bonbibi’s eyes, both the tiger and the islanders are equal: they need the forests. The mythology dictates that fishermen, honey and crab collectors must enter the forests with a pure heart and take no more than what is necessary for survival.

The islanders believe they share a “parallel history” with the tiger. They believe in the story that tigers, after being pushed out of Indonesian islands of Java and Bali, migrated to the Sundarbans. This mirrors the reality of islanders and their “history of rejection” by the state. Some of them were landless farmers and adivasis brought by the British to start cultivation and generate revenue. A majority migrated from then East Pakistan following India’s independence and partition. 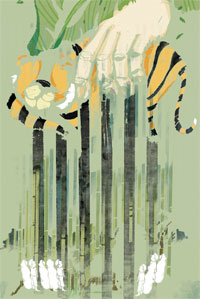 In 1979, the erstwhile communist government of Bengal enacted a massacre in the Morichjhapi islands. After partition, to manage the influx of refugees from East Bengal, the government settled them in the semi-arid Dandkaranya (parts of Odisha, Chhattisgarh, Maharashtra and Andhra Pradesh), a region far removed from where they belonged. After the communists came to power in Bengal, the refugees had made their way back and settled in the Morichjhapi islands of the Sundarbans. When they were forcibly removed by the then Left Front government of West Bengal, an estimated 4,128 families perished due to cholera, starvation, their boats drowned by the police or simply shot to death. “The ease and brutality with which the government wiped out all signs of bustling life of the past 18 months were proof for the islanders that they were considered completely irrelevant to the more influential urban Bengali community, especially when weighed against the tigers,” Jalais writes.

In the islanders’ understanding, Morichjhapi marks the beginning of tigers becoming “arrogant”. The tigers, they would explain, were disturbed by the violence and started attacking people. Many contended that corpses of killed refugees floating in the water gave them a taste for human flesh. Notwithstanding the veracity of such belief, in local perception, Morichjhapi marks the entry of the cosmopolitan tiger armed with state protection. Jalais brings out similarities between seemingly opposite ways of the colonial ruler and the present conservation exercises. In the colonial literature, the Sundarbans tiger was reasoned a man-eater because the superstitious residents were too afraid to stand up to it. The British killed them at the rate of 1,200 per year.

While in the colonial times the British were more concerned about revenue and killed the tiger with impunity, a century later, “the prestige of hunting” was replaced by prestige of “save the tiger”. What was always ignored, argues Jalais, was the local perception of the tiger. The government, for instance, introduced and distributed free plastic masks to honey collectors and wood cutters reasoning that tigers attacked from behind. Wearing a mask at the back of one’s head, the government reasoned, would puzzle the tiger and it would not attack. After the trial run, the government said that no one wearing a mask was ever killed, and only the “too superstitious” who did not wear masks were attacked. According to Jalais, neither the colonial nor the conservationists’ representation of the tiger permits an engagement with the local ways of understanding tigers.

For the islanders, the new cosmopolitan tiger is a high status animal enjoying state protection through investment in tourism and sanctuaries. “It is this tiger, one that is constructed by the state, conservation NGOs and urbanites, that the islanders argued they were trying to fight against, not their old tigers,” Jalais writes.Â´Ã‡Ã¡The equal grace, with which Bonbibi once protected the tiger and the islanders, is replaced by the unequal preferences of the state. The conservationists’ bid to save the tiger, it seems, has lead to a great divide between the tiger and the islanders.