Book>> Carbon Trading How it Works and Why it Fails by Tamra Gilbertson and Oscar Reyes Dag Hammarskjld Foundation, Upsala Can be downloaded

Book>> Carbon Trading How it Works and Why it Fails by Tamra Gilbertson and Oscar Reyes Dag Hammarskjld Foundation, Upsala Can be downloaded

The authors of Carbon Trading How it Works and Why it Fails have done seminal work in exposing the fallacy of reliance on market mechanisms to tackle climate change. They name individuals and corporations who have benefited immensely from lobbying for a market-based solution despite the failure of both the emissions trading and the offset mechanisms in delivering emission reductions.

Carbon trading has a simple goal: to make it cheaper for companies and governments to take on emission reductions targets. Governments or intergovernmental bodies hand out licenses to pollute (or carbon permits) to major industries. Instead of cleaning up, companies are allowed to buy and sell their permits.It is assumed the cost of buying extra permits and continuing to pollute the atmosphere will at some point be so prohibitive that most companies would prefer to cut down their CO2 release and invest in cleaner fuel technologies

Tamra Gilbertson and Oscar Reyes expose the fallacy of the system. They show turning greenhouse gases into a single commodity carbonwhose value is determined by what it can be swapped for gives birth to a financial system that is both complex and inequal. This system incorrectly recognizes greenhouse gases from a range of industrial, agricultural, forestry and domestic practices as equal. It ignores social, economic, technological, political and historical differences across countries.

The number of carbon trading permits is calculated according to existing levels of pollution, which means those who have polluted most in the past are rewarded with the greatest subsidy. One gets trading permits based on flaring of gas and makes money selling both the gas and the permits. 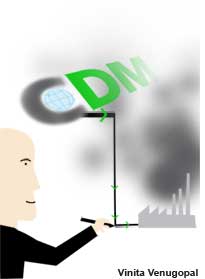 The authors also expose the moral judgements in the argument that markets provide the least cost solution. The developed worlds toxic waste can be treated more cheaply in the Third World simply because advocates of market-based solutions place a lower value to a life in India or Africa as compared to the US and Europe.

The authors do not explicitly bring out what I have maintained for years if we succeed in equitably allocating the available environmental common among the planets residents, there will be nothing to trade across borders from the South to North.

It should not surprise anyone that proposals on carbon trading were generated by none other than the US. In 1997, Brazil proposed The Clean Development Fund: parties who fail to comply with their emissions commitment were to be penalized through a requirement to contribute to a fund used by developing countries to foster sustainable development. But when we reached Kyoto, the fund had been successfully rechristened as the Clean Development Mechanism. The British journalist George Monbiot has aptly called it an exuberant global market in fake emissions cuts.