Book>> The Big Necessity, The Unmentionable World Of Human Waste And Why It Matters • by Rose George • Metropolitan Books • Rs 550

The average human spends three years of his or her life in the toilet. The filthy streets of Europe are thought to be the reason for the sudden popularity, in the 17th century, of high heels.

The poet W H Auden allowed his guests only one toilet paper a day. Anything more, he thought, was wasteful—the average American uses more than 50 toilet papers a day.

These are amongst the interesting bits in American journalist Rose George’s new book, The Big Necessity, The Unmentionable World of Human Waste and Why It Matters. George has just the right kind of breezy-serious approach needed to grapple with the universal taboos about human waste and what happens to it. “There is no neutral word for what humans produce at least once a day, usually unfailingly.

Our delicate sensibilities force companies to advertise toilet paper using pastels and puppies,” George writes. But people were not always squeamish about good sanitation. The ancient Romans defecated in company, squatting over running water and using sponges on sticks to clean themselves.

Victorian London’s first public toilets were called “public necessities” and charged one penny (hence the euphemism ‘Spending a penny’). Nowadays they are hard to find: nearly half of all London’s public toilets have been closed down in the past eight years. China has stayed fertile because of its 4,000- year-old tradition of spreading night soil on their field. 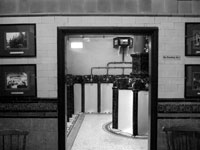 Today, though, countless coastal cities have no better solution for disposing of their excreta than dumping it in the sea. George writes, “What’s the hope for slums when even the richest, bestequipped humans still don’t know what to do with sewage except move it somewhere else and hope no one notices when it’s poured untreated into drinking water sources.”

George descends into London’s sewers, the mightiest in the world. Dating from the 1850s, they are rather splendid and not especially smelly. They contain prams, motorbike parts, goldfish and jewellery. New York’s sewers, George finds, are designed to carry storm water as well as sewage. In heavy rain they flood and discharge their contents into the nearest outlet, often the city’s subway system.

The interesting information is interspersed with the usual World Bank style platitude about sanitary conditions in the Third World. “Four in 10 people,” writes George, “have no access to any latrine, toilet, bucket, or box...Instead, they defecate by train tracks and in forests.

They do it in plastic bags and fling them in ..narrow slum alleyways. Children suffer most. Diarrhoea— nearly 90 percent of which is caused by fecally contaminated food or water—kills a child every 15 seconds.”

Sometimes the author is a little off the mark. For example in describing Indian culture as faecal phobic, Rose betrays a Brahminical understanding. This is a perspective that does not appreciate the value of cow dung by farmers in different parts of the country. It also blinkers her to the Ladakhi use of night soil to fertilise fields.

Mohan Patel is a playwright and community media practitioner in Ahmedabad