Book>> The Age of Wonder, How The Romantic Generation Discovered The Beauty And Terror Of Science Pantheon Books, New York Indian Price Rs 1,000

Book>> The Age of Wonder, How The Romantic Generation Discovered The Beauty And Terror Of Science Pantheon Books, New York Indian Price Rs 1,000

In 1815, a medical student spent a drink-addled night enthusing over a newly purchased verse translation of Homer's Iliad. Next morning, he took less than four hours to pen down his own famous poem, in which he compared his feelings with those of "some watcher of the skies when a new planet swims into his ken". The medical student in question was the famous poet, John Keats. He was referring to William Herschel, the astronomer who had effectively enlarged the solar system in 1781 by detecting a sixth planet, Uranus.

Herschel was an eccentric musician from Germany who came to England a few years earlier and then turned to astronomy.Assisted by his indomitable sister Carolyn--with whom he had a troubled relationship--Herschel invented powerful telescopes that mapped the heavens to hitherto unprecedented extent. 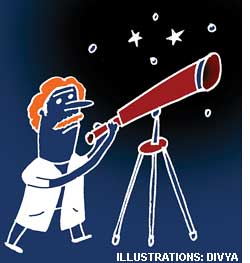 The distinction between arts and science was not known in that age, Richard Holmes tells us in The Age of Wonder. At school, Keats had learnt about gravity through theatrics while one pupil remained stationary to act as the sun, the other child-planets circled round at different speeds and distances to form a living orrery.

Holmes teases out elusive meanings between the works of poets and scientists. To modern eyes, Keats or Virgil should not stand cheek-by-jowl with anatomy, but this is precisely what happened in the science writing of the time.

Science in the Romantic Age needed speculation because commitment to scientific observation and method alone could be seen as merely and vulgarly empirical. In this age, science's reliance upon speculation had the practical result of dispensing with the butchery of animal experiments.

Holmes is a gifted story teller. But there are stories, he chooses not to tell. Women writers of the time are neglected the poet Anna Seward wrote the opening lines to Erasmus Darwin's The Botanic Garden and Charlotte Turner Smith wrote of the latest discoveries in geology and fossils in her poem Beachy Head.