Roots of the rut

At one point in this book under review Australian naturalist Tim Flannery describes how the Greater African Honeyguide uses a distinctive call to lure people to beehives, which then become a shared food source.

Such relationships, he laments, are breaking down, as “lazy humans” have shifted to abundant, industrially produced sugar, and technology has eroded our connection with nature.

Flannery is among the most extraordinary intellectuals of our times. About 25 years ago he transformed Australia’s understanding of itself and its history by showing how the continent was formed, how it was reshaped by man—first aboriginal man, then white man—and how human intervention has impoverished its already fragile life systems.

The naturalist returns to humankind’s love-hate relation with nature in Here on Earth. He sees the intellectual roots of the strife between nature and humans in Darwin’s Theory of Species. Flannery contrasts the great sage of evolution with his contemporary Alfred Russel Wallace who saw nature, not as a punch-up, but as a great interactive cooperative. Wallace, Flannery believes, sowed the seeds for James Lovelock’s Gaia hypothesis which acknowledges that in their interactions living creatures profoundly affect the Earth’s fabric: its chemistry and its physical structure. 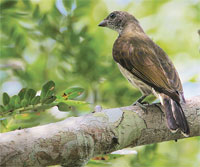 Darwin himself recognised that animals are commonly cooperative. But Flannery believes a crude Darwinism lies at the core of the ruthless competition ethics of our times which has pernicious consequences for both nature and humankind.

In a section on nuclear power, he describes how biologists, after the Chernobyl disaster, found that certain Mediterranean shrimp species had extraordinarily high concentrations of the radionuclide polonium 210 in some organs. Flannery notes this was the poison used to murder the Russian dissident Alexander Litvinenko in 2006.

Such exaction on nature has in recent times led Gaia theorists, including Lovelock, to predict that the earth will take its revenge on humankind—climate change is often mentioned as an instance of such vindictive behaviour. Flannery does not go with such grim prognostications. He goes back to the more optimist understandings of Wallace believing that a change in values will make humankind embrace a symbiotic relation with nature.