Stephen Hawking's last book has the answer to everything

Writing for the lay reader usually means simplifying something to make it reach a wider audience. Rarely one finds a writer who does it by challenging the reader’s intellect and not by dumbing it down. Stephen Hawking was one such writer. In Brief Answers to the Big Questions he says that most people can “understand and appreciate” the basic ideas behind complex scientific concepts “if they are presented in a clear way without equations” and that he “enjoyed” trying to do it. The book, which turned out to be his last, does just that, and more.

It deals with some of the most common issues people debate every day (“Is there a God?” or “How did it all begin?”) but also has chapters on concepts that are borderline science fiction and require a heightened sense of imagination to comprehend (“What is inside a black hole?” and “Is time travel possible?”). It not only discusses issues relevant today (“Will we survive on Earth?” and “Should we colonise space?”) but also dwells on questions that could be crucial in future (“Will artificial intelligence outsmart us?”).

Most of these questions evoke polarising views and Hawking too has not hedged his replies. He says what we know, what we don’t, and what we don’t at our current level of understanding but soon could. For instance, he says we know how the universe came into being but we do not know how life originated on Earth. Here are some of his other major pronouncements: we must colonise space, he writes, because population growth is draining our resources while climate change is making Earth uninhabitable. “If we stay, we risk being annihilated,” he says. He is also categorical about the need to control the development of artificial intelligence (AI). “The real risk with AI isn’t malice but competence. A super-intelligent AI will be extremely good at accomplishing its goals, and if those goals aren’t aligned with ours, we’re in trouble,” he states. But Hawking’s most tendentious view is, perhaps, on god, whose need as the creator he denies in the first chapter of the book. He says the universe could have popped into existence without breaking any physical law, which precludes the need for a god.

Hawking says the universe needed three things to come into being: matter, energy and space. Albert Einstein showed energy and matter are interchangeable, and it can, therefore, be said that the universe needed just two things—matter/energy and space, both of which came into existence at the time of the Big Bang. The energy that was released with the Big Bang required an equal amount of “negative energy” to counterbalance it, as per the laws of physics. Space was the store of that negative energy. “The endless web of billions upon billions of galaxies, each pulling on each other by the force of gravity, acts like a giant storage device.” 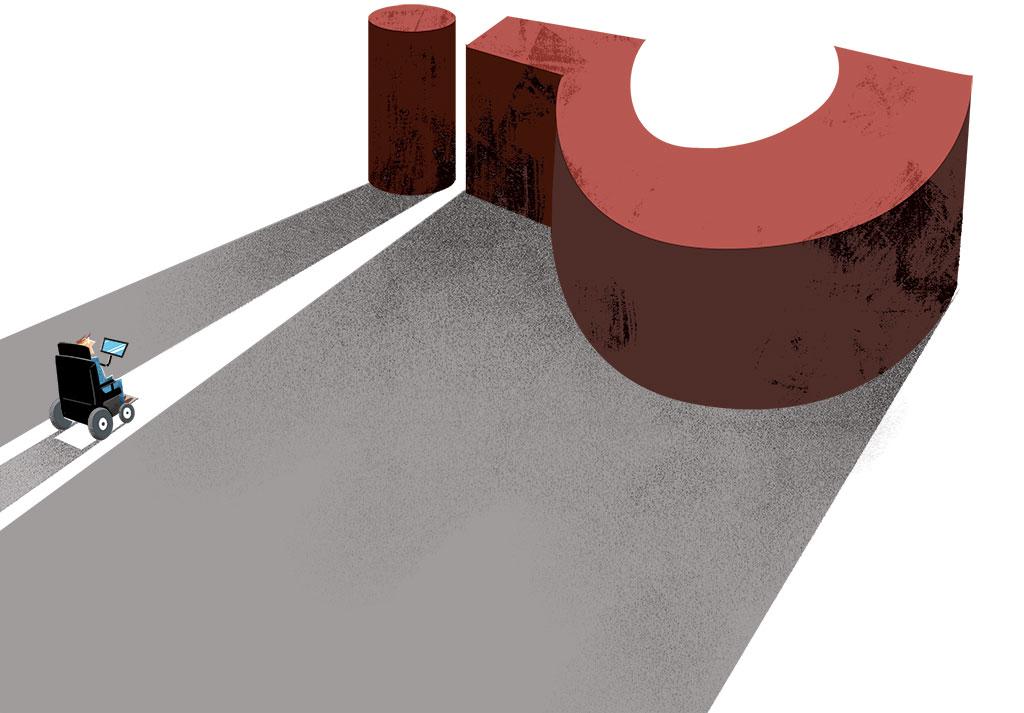 But that does not explain what caused the Big Bang. Quantum mechanics shows that protons pop into existence randomly at the subatomic level, stay for a while and vanish to appear again somewhere else. Since we know that the universe was at one point perhaps even smaller than a proton, it could have just popped into existence without violating any known laws of nature.

But who made these quantum laws that explain the Big Bang? Hawking says we ask this question because our everyday experience tells us that everything that happens is caused by something else that happened earlier in time. But this cause-and-effect relationship is not applicable to the Big Bang because there was no time before it for anything to have caused it. Time began with the Big Bang. “We finally have found something that doesn’t have a cause, because there was no time for a cause to exist in. For me this means that there is no possibility of a creator,” writes Hawking.

Scientists, even lay readers, can certainly come up with a different set of theories and questions that could quite validly counter Hawking. But if one accepts his presumptions, which are based on science, and not on belief systems, the logic is pretty neat. Even Hawking says there is one thing we don’t know yet—the role played by time at the beginning of the universe. It is “the final key to removing the need for a grand designer and revealing how the universe created itself”.

The diversity of topics Hawking has touched upon in the book is remarkable and shows his interest in not just the sciences, but in literature, cultures and current affairs. Shakespeare, Kant and Proust find mentions, so do Darwin and the Bhagwadgita (Hawking does not talk about it himself, but it appears in a quote attributed to the US physicist Robert Oppenheimer). There are also caustic remarks on Donald Trump and the UK’s Brexit vote. And there is an ample dose of Hawking’s characteristic wit. “We don’t expect the universe to end in a brick wall, although there is no logical reason why it couldn’t,” he writes. There is also self-deprecation. Hawking says he’s “possibly the best-known scientist in the world” partly because he fits the stereotype of a disabled genius.

What comes across more than anything else in this book is his skill to make complicated science understandable. It was a quality that endeared him to students and enthusiasts alike. Apart from his scientific accomplishments, which are considerable, his ability to connect with the lay reader was the reason behind his global popularity, not the stereotype of a disabled genius. One does not have to be a theoretical physicist to disagree with Hawking on that.

(This review was first published in Down To Earth's print edition dated April 1-15, 2019)