With social media stoking revolt against tyranny in Egypt, Tunisia and Iran, it is difficult to be critical of virtual interactions.

But there is a group of writers who play devil’s advocate. Last year, journalist Nick Carr warned us of the socially numbing aspects of the Internet, and Evegeny Moro zov rebutted notions of the Internet as a harbinger of democracy.

The Internet, however, takes just a section in Alone Together. The first section deals with objects that imitate living beings. Sophisticated robots evoke emotional connections in scientists. Some feel pseudo-parental attachment and hate leaving them “alone” in labs at night. 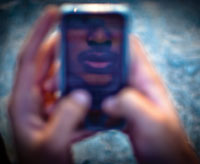 Students were asked to converse with Eliza, probing its capacity to imitate human chat. Instead of exposing its weaknesses everyone pandered to its strengths.

Interviews in the second half show people start with an illusion that technology will give them control and end up being controlled. BlackBerrys, bought to manage e-mails, are usually the first objects of attention in the morning and the last be fore going to bed. Turkle int erviews teenagers morbidly afraid of phone. They find its immediacy and unp redictability upsetting. A phone call in real time requi res spontaneous performance; it’s live.